MarketsandMarkets™
Consumer awareness regarding the health benefits of omega-3 and an increase in application profiling and existing applications finding new markets are the factors that are projected to drive the growth of the global omega-3 market.

The global omega-3 market size is estimated to be valued at USD 4.1 billion in 2019 and is projected to be worth USD 8.5 billion by 2025, recording a CAGR of 13.1% during the forecast period. The growing demand for food fortification, increase in application profiling, and innovative product technologies shall drive the growth of the global omega-3 market over the next few years. Due to the increasing trend of mother and infant nutrition products, consumption of omega-3 fatty acids improve the performance. The omega-3 market is projected to record significant growth during the forecast period. In addition, due to the rise in health awareness among consumers, omega-3-based dietary supplement products are projected to witness high demand in the market. 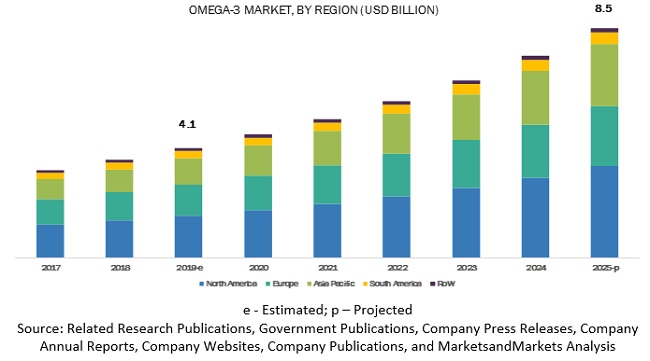 1. To define, segment, and project the global market size for omega-3

2. To understand the omega-3 market by identifying its various subsegments

3. To provide detailed information about the key factors influencing the growth of the market (drivers, restraints, opportunities, and industry-specific challenges)

4. To analyze the micro markets, with respect to individual growth trends, prospects, and their contribution to the total market

5. To project the size of the market and its submarkets, in terms of value, with respect to the regions (along with their respective key countries)

6. To profile the key players and comprehensively analyze their core competencies

7. To understand the competitive landscape and identify the major growth strategies adopted by the players across the key regions

The dietary supplement segment is projected to be the largest segment in the omega-3 market, by application, during the forecast period.

Omega-3 increasingly finds application in dietary supplements, functional foods & beverages, pharmaceuticals, infant formula, and pet food and feed. Dietary supplements are estimated to account for the largest market due to the fast-paced and busy lifestyles; consumers prefer consuming dietary supplements to make sure that they get their optimal share of nutrients, and omega-3 supplements are used to improve the health and performance, wherein athletes are advised adequate intake of omega-3 fatty acids for fit and healthy body.

On the basis of application, the infant formula is projected to grow at the highest CAGR in the omega-3 market from 2019 to 2025. The adoption of omega-3 fatty acids for infant formula is expanding because most mothers these days are found deficient in omega-3 fatty acids (mainly DHA, which plays a major role in the growth and development of infant brain and retina). Asia Pacific is projected to be the fastest-growing market for omega-3 fatty acids between 2019 and 2025. Asia Pacific is the key market for omega-3 fatty acids, as these are the emerging economies expected to grow, due to urbanization and governments focus on fortified food and health awareness. The trend of consumer preference for low-fat products is rapidly rising, highlighting their use and health benefits.

Consumer awareness toward healthy food has been driving the market for nutritive food products. Consumers are considering expenditure on fortified products for the ease of gaining essential nutrients. The demand for EPA and DHA is growing in mother and infant nutrition products, due to their role in brain development in infants.

The growth in consumer demand for-plant based ingredients and vegan products is a potential opportunity to launch the DHA and EPA sourced from plants. For future growth, microalgae have higher potential for plant-based DHA. Demand for omega-3 ingredients is high in developed markets such as the US and Europe. This demand is driven by an increase in the production of processed foods and innovation in almost all segments.

In 2018, North America accounted for the largest market share in the omega-3 market. The omega-3 market in North America is primarily dominated by the US, as the adults prefer to consume fish oil sourced omega-3 capsules as dietary supplements. The omega-3 market in North America is also characterized by the presence of several players such as Cargill (US), Epax Norway AS (Norway), DSM (Netherlands), and Arista Industries (US). These players extensively used innovative technologies to increase their productivity and meet the consumer demand for value-added omega-3 products in the region. Also, the omega-3 deficiency among the citizens in the US and Canada has highly impacted the surge in the demand for omega-3-based products.

The key players in this market include Cargill (US), BASF (Germany), DSM (Netherlands), Croda International (UK), and Epax (Norway). New product and technology launches, expansions & investments, agreements, and partnerships were some of the core strengths of the leading players in the omega-3 market. These strategies were adopted by the key players to increase their market presence. It also helped them diversify their businesses geographically, strengthen their distribution networks, and enhance their product portfolios. Some of the other players in the omega-3 market include Lonza (Switzerland), Orkla Health (Norway), Corbion (Netherlands), KD Pharma (Germany), GC Rieber (Norway), Guangdong Runke Bioengineering (China), Nordic Naturals (US), Golden Omega (Chile), Biosearch Life (Spain), Pharma Marine (Norway), Polaris (France), Sinomega (China), Kinomega (China), and Huatai Biopharm (China).

1. In October 2019, KD Pharma (Germany) introduced Kardio3, which is a blend of omega-3, vitamin K2, and phytosterols. It aids in maintaining healthy lipids and supports heart and bone health.

2. In September 2019, Epax (Norway) announced an investment of USD 35 million over the next two years for the innovation of its Omega-3 sector. This investment will allow Epax to have better capacity in the omega-3 industry at its main site of production in Norway. It will facilitate the extended concentration of EPA and DHA without prompting oxidation, which will ultimately avoid unwanted by-products.