The hydraulic pump is the power component of the hydraulic system. It is driven by an engine or an electric motor, sucks oil from the hydraulic oil tank, forms pressure oil and discharges it, and sends it to the actuator. Hydraulic pumps are divided into gear pumps, piston pumps, and vane pumps according to their structure. The following will explain the problems frequently encountered during hydraulic pump repair and maintenance.

One of the hydraulic pump problems: leakage

1. Leakage classification: leakage is divided into internal leakage and external leakage. According to the degree of leakage, there are various manifestations such as oil film leakage, leakage, dripping and spraying. Oil film leakage occurs between relative moving parts, such as the sliding pair of the rotating body, reciprocating movement (such as the piston rod of the hydraulic cylinder, the spool extension of the manual reversing valve, etc.); leakage occurs in the end cover valve plate joint And so on; dripping and leakage mostly occur in pipe joints, etc.; spraying and leakage mostly occur in pipe ruptures, leaking installation and sealing.

(1) The seal is ineffective due to poor quality, improper assembly and damage, long-term aging and deterioration, and incompatibility with the working medium;

(2) The wear of the relative motion pair increases the clearance and internal leakage, or the internal and external leakage due to strain on the mating surface;

(3) The oil temperature is too high;

(4) The system pressure is too high;

(5) Incorrect size design of the sealing part, poor processing accuracy, and poor assembly will cause internal and external leakage.

On the basis of finding out the causes of internal and external leakage, take symptomatic measures

The second problem frequently encountered in hydraulic pump maintenance: the pressure of the hydraulic system is abnormal, and the pressure cannot go up or down

(1) Actuating components (such as hydraulic cylinders, hydraulic motors) do not move, or although they move, they stop moving or become weak when loaded, and cannot overcome the load and do work;

(4) The speed of the actuator is reduced due to insufficient load flow.

(5) Failures including safety accidents due to uncontrolled pressure regulation.

C. hydraulic pump inlet and outlet ports are installed reversely, and the pump is a non-reversible pump, which not only cannot be oiled, but also breaks the pump shaft oil seal.

(2) Failure of pressure regulating valve such as overflow valve

For example, the spool of the overflow valve is stuck in the large opening position, and the pressure oil output by the hydraulic pump flows back to the oil tank through the overflow valve, that is, the pressure oil is shorted to the oil return path; it may also be that the orifice of the pressure control valve is blocked or adjusted. The pressure spring breaks and other reasons cause the system to be pressureless. On the contrary, when the relief valve spool is stuck in the position of closing the valve port, the system pressure will not come.

(3) It is found that the pressure does not rise or fall during the working process. It is likely that the reversing valve fails, causing the system to be unloaded or closed; or it is caused by serious internal leakage between the valve core and the valve body hole.

(4) The unloading valve is stuck in the unloading position, the system is always unloaded, and the pressure cannot rise.

(5) Leakage inside and outside the system.

(6) Inside the valve mounting plate (manifold block) there is a position where the pressure oil channel and the oil return channel are in series.

(7) The spool of the reversing valve does not move in place, causing the pressure oil cavity and the oil return cavity to channel.

(2) Correct the direction of the inlet and outlet of the hydraulic pump, especially for non-reversible pumps. 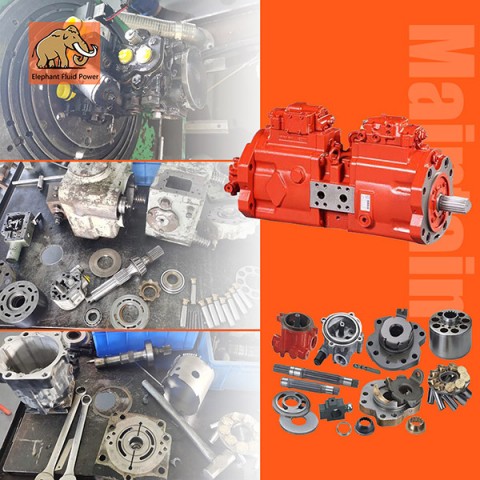