The report “Clean Room Robot Market with COVID-19 Impact Analysis by Type (Articulated, SCARA, Collaborative Robots), End User (Aerospace, Electrical & Electronics, Food & Beverage), Component (Robotic Arm, End Effector), and Region – Global Forecast to 2025″, (including prices of peripherals, software, and system engineering) size is expected to grow from USD 4.8 billion in 2020 to USD 8.5 billion by 2025, at a CAGR of 12.0% during the forecast period. One of the major drivers contributing to the market size is companies endeavoring to replace humans in clean room environments by clean room robots as contamination caused by humans is unpredictable. A worker is capable of shedding 600,000 particles of skin per hour, which can also contain several micro-organisms, which is strictly unacceptable in industries such as pharmaceuticals and food & beverages. Companies also aim to reduce personnel on the floor so as not to be blindsided by situations like COVID-19 in the future which cause a shortage of labor. Guidelines laid down by several government organizations for hygiene standards have further prompted companies to adopt clean room robots. For instance, the Food and Drug Administration (FDA) recommends that the areas immediately adjacent to the aseptic processing line meet at least ISO Class 7 standards under dynamic conditions in the pharmaceutical industry. Moreover, in clean rooms, goods and materials need to be transferred between areas of different environmental grades through material airlocks (MAL). In this process, goods and materials need to be cleaned with isopropyl alcohol (IPA) to prevent the transfer of impurities. When inhaled or absorbed by humans, IPA can have life-threatening effects, such as affecting the central nervous system, which controls the involuntary actions of the body, including heartbeat, breathing, and gag reflex. IPA causes blood’s thinning, which causes blood sugar levels to fall, which can eventually lead to seizures. Therefore, considering human safety, companies are moving toward clean room robots. 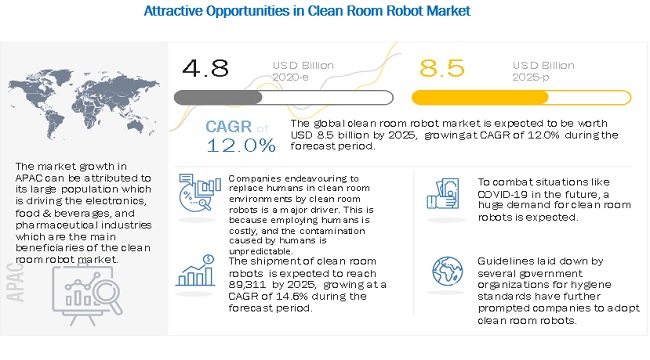 Collaborative robots are expected to grow at a higher rate during the forecast period as compared to traditional industrial robots as they are cheaper and are more affordable for SMEs. The governments of various developing countries such as India and the Philippines are encouraging SMEs to provide employment opportunities and to make the country self-reliant. For instance, the Indian government has set up MUDRA banks to offer credit scores and services to small entrepreneurs outside the provider discipline of standard banks. Also, due to their collaboration with humans, collaborative robots are more flexible and adaptable in changing the manufacturing processes according to the fast-changing trends. Therefore, collaborative robots are gaining more market share.

The market for SCARA robots is expected to grow at the highest CAGR during the forecast period. This is because they cost lesser than articulated robots and offer a considerable degree of freedom with 4 axes. Articulated robots can cost between USD 19,000 and USD 120,000, whereas SCARA robots can cost between USD 10,000 and USD 50,000. Also, SCARA robots occupy less space than cartesian and parallel robots and are therefore more adopted than cartesian and parallel robots. In order to be future ready for pandemics such as COVID-19, companies are moving towards automation and are reducing dependency on humans for operation. As articulated robots possess the highest degree of flexibility owing to the maximum number of joints as compared to other robots, they can be molded easily for new manufacturing processes. Due to this independency, articulated robots are expected to be adopted at highest rate to cope with situations like COVID-19.

Clean room robot market in APAC is expected to grow at significant CAGR during the forecast period.

Market in APAC is expected to grow at highest CAGR during the forecast period for the clean room robot market. This is because of presence of the world’s most populous countries, such as China and India. The large population gives rise to a huge demand for clean room robots in the manufacturing of fiber optics from the telecommunication industry. Also, APAC countries have a strong IT industry due to the availability of a cheap workforce. For instance, according to India’s Ministry of Commerce & Industry, in January 2020, Nippon Telegraph and Telephone, a Japanese tech announced its plans to invest a significant part of its USD-7-billion global commitment for a data center business in India over the next years. This is expected to further increase the demand for clean room robots in the optics industry. Due to the large population, the food & beverage industry is also flourishing in APAC. According to the Population Reference Bureau, in 2019, China had the largest population, followed by India. Also, countries such as Japan and South Korea are major manufacturers of robots; therefore, this further boosts the clean room robot market in APAC. The electronics industry is also booming in APAC due to the increasing buying capacity and cheap labor. For instance, according to the Ministry of Statistics and Programme Implementation, per capita income in India increased by 6.8% in 2019.