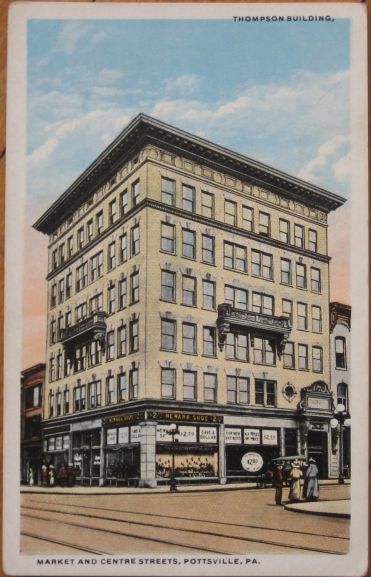 POTTSVILLE, Pa. – The Thompson Building has a new owner, Advanced Consulting Inc., with a vision to bring the oldest skyscraper in Pottsville to local, state, national and international audiences.

Advanced Consulting Inc, Chief Executive Officer Gem Lake says revitalization of a downtown area should start with the most iconic assets, The Thompson Building fits into that category. City officials want the building to be a part of downtown’s resurgence with a vision to unleash new life, solidify its historic position from the past to the future and remain a destination for all. Renovations are being planned to keep its historic look while upgrading key areas of the building.

The Thompson Building history goes into the era of roaring 20’s and beyond. According to records, the six-story building at the corner of North Centre and West Market streets was built in 1909 and is considered the city’s first skyscraper.

As part of its vision, the company is launching the 1909 initiative aimed at merging the past with the future with several divisions under its umbrella. University 1909 is designed to host special courses only available at The Thompson Building to attract audiences from around the nation to learn from Celebrities, Professors, top Business Executives and many others.

With an always evolving world of technology, The Mountain Tech Hub has an innovative business structure designed to provide more opportunities in technology and small business development. The Mountain Tech Hub (Tech 1909) will open new businesses designed as an incubator for startups, individuals and new ideas to establish the next generation of greatness, pulling on the past, present and future.

On the ground floor of the building, there are plans to create a mini museum and art gallery, a coffee shop along with a Luxury Boutique.

City Administrator Thomas A. Palamar said that the building had been on the “target property” list for redevelopment knowing that it can be a key part to the area’s revitalization.

“We’ve been attempting to go in and do what we can to try to stay ahead of what’s going on,” Palamar said. “We’re willing to put our money where our mouth is and actually fund the study that would determine exactly what’s going on. If we can do that, we can go to the next step.”

The Thompson Building is one of the staples of The City of Pottsville and is on the path to positively impact the redevelopment of the downtown area.