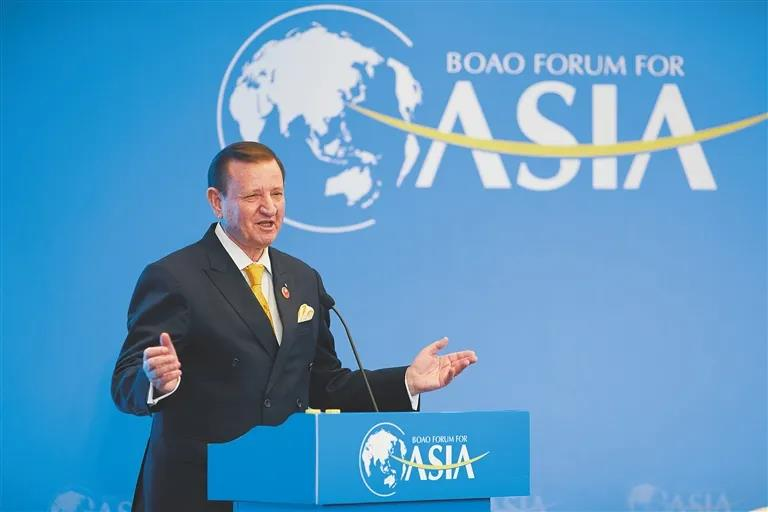 A series of dialogues of “Talk with Blueconomy” are initiated by China Marine Economy Expo (hereinafter referred to as the CMEE). It invites high-level guests from government, commerce, science and technology, economy, ideology, culture and many other fields to discuss important issues affecting the global blue future, aiming at promoting cutting-edge exchanges between science and technology and commerce, building a sustainable development ecology of the global commercial society and advancing towards a new global blue future.

The CMEE is held once a year in Shenzhen. As the only national marine economic exhibition in China, it serves as an important economic and trade platform to promote the high-quality development of marine economy, promote international cooperation in blue economy and jointly build “the 21st Century Maritime Silk Road.”

John Aquilina, Malta’s ambassador to China said, Malta has superior “innate conditions” and the following advantages, which make it a world maritime power and a global maritime center.

1. Malta was the first country to practice the concept of developing modern shipping industry and building a free port, because it realized very early that it must realize the scale, modernization, systematization and institutionalization of its marine economy if it wants to become a powerful marine economy;

2. There a legal system with high stability, high predictability and high applicability in Malta, which has well promoted the development of high-end service industries such as finance and law, and effectively enhanced the competitiveness of the country;

3. Malta has a highly open market and a mature maritime shipping business system, so it attracts a large number of international investors and capital infusion, thus making its marine industry develop better.

4. Malta has a highly developed tourism industry and related supporting services, which makes it highly competitive among ports along the Mediterranean coast. When the homogenization of other services intensifies, their success depends on their service efficiency, convenience and quality.

Q1: What is the status of blue economy in Malta?

John Aquilina: The blue economy accounts for nearly 5% of Malta’s GDP, which is much higher than the average level of EU member States, so its importance to our country’s economic development cannot be underestimated. However, more attention is paid to the sustainable development of the blue economy in Malta. For us, the ocean is not only a source of investment, employment and economic growth, but also a home on which we live. Therefore, we will have a better development only if it turns to be healthier.

Q2: Judging by its land area, Malta is a maritime island country, which currently occupies an important position in the world marine economy and has become the world maritime center. What experience can Malta share with all of us in this regard?

John Aquilina: The land area of Malta is rather small, however, our geographical position is superior, since we are located in the core of the Mediterranean Sea, the busiest inland sea in the world, a stone’s throw away from Suez Canal, and connecting Europe, Asia and Africa, all of which give us good opportunities for development. Our maritime business has a long history of development, and is still maintaining continuous evolution and development, and has strong competitiveness in the world market.

First, Malta is a pioneer in developing modern shipping industry and building a free port. We realized at an early age that we must realize the scale, modernization, systematization and institutionalization of its marine economy if we wants to become a powerful marine economy;n. Therefore, as early as 1960s and 1970s, we began to develop our shipping industry and free port with forward-looking ideas, which enabled us to maintain strong competitiveness in the current market with rapid technological development.

Second, our business is constantly expanding to financial and legal services with higher added value. In particular, we started to provide professional high-end services such as shipping finance and maritime legal consultation very early, which makes our country highly competitive in the maritime field. Malta has a small regulatory structure, so communication and collaboration between different departments will be more convenient. When enacting maritime laws, especially in the face of the new economic situation, the Maltese government can quickly formulate and adjust maritime laws according to the actual situation, so as to make the legislation more suitable for its national conditions. The stability, predictability and applicability of our country’s legal system make us have a developed legal and commercial service ecology.

Third, Malta has a highly open market and a mature maritime shipping business system, which attracts a large number of international investors and capital infusion. For example, Malta’s two major ports have been invested by international capital, and its shareholders include CMA CMA Shipping Group of France and China Merchants Group of China. With capital injection and its continuous introduction of advanced international management concepts and operation modes, Malta’s marine economy has made great progress.

Fourth, Malta has a highly developed tourism industry and related supporting services, which makes it highly competitive among ports along the Mediterranean coast. When the homogenization of other services intensifies, their success depends on their service efficiency, convenience and quality, but that’s the strengths of Malta.

Q3：What are the prospects for the future cooperation between China and Malta?

John Aquilina: 2022 marks the 50th anniversary of the formal establishment of diplomatic relations between Malta and China, which is a historic moment.

Malta and China have been friendly partners for the past half century. For a long time, the leaders of the two countries have interacted frequently, and there are also many people-to-people exchanges between the two countries. Traditional Chinese medicine is very popular in Malta and is accepted and sought after by most local people. Besides, many Chinese elements can be found in Malta, and there are many Chinese restaurants on the small island.

I think the two countries are complementary in many ways, so we can make full use of this to make further exchange and cooperation. In addition to our great advantages in maritime affairs, we also lead the world in tourism and vacation, English education and so on.

I think more and more Chinese tourists will come to Europe when COVID-19 comes to an end one day. I know many of them have been to big cities like London, Berlin and Milan so they might consider taking a few days to come to Malta in the future and enjoy the sunshine and leisure of the Mediterranean Sea.

In addition, our English education is advanced and inexpensive. In the future, we also hope that more Chinese young people can consider coming to Malta to improve their language ability.

Q4: So, may I ask your impression of China? What is your favourite ocean city in China?

John Aquilina：I have been to many cities in China. Not long ago, I just went to Ningbo, and I photographed a container ship flying Maltese flag at the port. I am proud of my country, which has one of the largest number of registered ships in the world, and almost every port has Maltese-flagged ships coming in and out every day.

Regarding to my favorite coastal cities in China, Xiamen and Sanya are both wonderful ones, they are really good destinations for vacation.

Of course, Shenzhen also left me a very good impression, which is a vibrant city. The planning of the whole city is very good, and it is a prosperous scene. But unfortunately, I always spend it on a busy business trip whenever I go to Shenzhen, and I don’t have a chance to go to the seaside. I hope to stay in Shenzhen for a few more days in the future, so that a I can be relax and feel the charm of the city. I think Shenzhen can consider focusing on some marine tourism and cultural elements on the current basis, which can help it better achieve its goal of building a global ocean centre city.