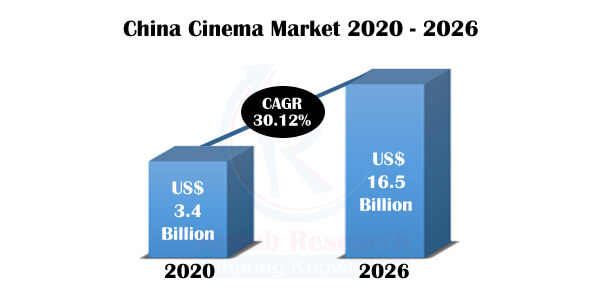 According to Renub Research, China Cinema Market is projected to grow with a staggering CAGR of 30.12% from 2020 to 2026.
China Cinema Market is expected to reach US$ 16.5 Billion by 2026. Forecast by Movies, Film Production, Tier City, Movie Industry, Ticket Pricing Analysis by City, Companies.

Until the outbreak of COVID-19, the China Cinema Market had reached an unparalleled ‘golden age. But the market declined in 2020 due to COVID-19 since all multiplex were closed. However, 2021 is proving to be a blockbuster year for the Chinese movie industry as economy has opened. The ticket sale from Chinese movie theatres, which has largely contained the coronavirus, has shown a huge jump. The China multiplex revenue for 2021 is expected to surpass the figures of 2019. According to Renub Research, China Cinema Market is projected to grow with a staggering CAGR of 30.12% from 2020 to 2026.

In China, factors that drive the cinema industries development are increasing the quota of foreign film in China, growth in the number of 3d screens in China, rising disposable incomes, growing number of working populations, rapid technology development in the filmmaking, film-screening equipment manufacturing industries, and the implementation of the cinema circuit system. In future the online movie industry is also expected to emerge as the ‘new giant’. As per our research report, the China Film Industry was US$ 3.4 Billion in 2020.

Request a Free Sample Copy of the Report: https://www.renub.com/request-sample-page.php?gturl=china-cinema-market-p.php

China’s film industry is on record for accelerated growth over the upcoming years. In the Chinese film industry, various films are created, such as feature film, cartoons, popular science films, documentary films, and special films. Feature Film and Popular Science Films is leading in the China cinema industry as people are interested and are enjoying these in theatres. Additionally, the Cinematic Imports in China maintain tight command over foreign films that are permitted to be screened, potentially pushed by the concern that a completely open market would endanger the local filming industry. Currently, there are two business models for foreign films releasing in China: revenue-sharing and flat-rate (i.e., a buy-out). On the other hand, Joint productions are deemed as domestic films. They can be directly released in the PRC after completing and passing the censorship review. According to our latest report, the China Movie Market is expected to reach US$ 16.5 Billion by 2026.

The 1st Tier and 2nd Tier cities in China hold most of the China cinema market due to the availability of more theatres, infrastructure, and people willing to pay higher prices for tickets than 3rd Tier and 4th cities. Ticket rates in these cities are also much higher than in the rest of the cities. The companies acting as the major players in the China Cinemas industry include Dalian Wanda Group, China Film Group Corporation, Guangdong Dadi Cinema Circuit Co. Ltd., Shanghai Film Group Corporation and Hengdian Group Holdings Limited.

Effect of COVID-19 on the Chinese Cinema Industry:

Revenue for Cinemas in China declined in 2020, as the COVID-19 pandemic has severely restricted film screening activity. But, the demand for film watching is surging in Chinese theatres as they were able to reopen by midyear and have seen continuous audience growth. Lunar Year for 2021 came as a blessing for the Chinese box office, as most people were encouraged to stay in the city. So watching movies in the theatres became the top choice of entertainment. Besides, the lack of other entertainment options helped pump up ticket sales during the pandemic.

Follow the link for the full report with detailed TOC and list of figures and tables: https://www.renub.com/china-cinema-market-p.php

Company Analysis has been covered from 3 viewpoints:

Renub Research is a Market Research and Consulting Company. We have more than 10 years of experience especially in international Business-to-Business Researches, Surveys and Consulting. We provide a wide range of business research solutions that helps companies in making better business decisions. We partner with clients in all sectors and regions to identify their highest-value opportunities, address their most critical challenges, and transform their businesses. Our wide clientele comprises major players in Healthcare, Travel and Tourism, Food & Beverages, Power & Energy, Information Technology, Telecom & Internet, Chemical, Logistics & Automotive, Consumer Goods & Retail, Building and Construction, & Agriculture. Our clients rely on our market analysis and data to make informed knowledgeable decisions. We are regarded as one of the best providers of knowledge. Our pertinent analysis helps consultants, bankers and executives to make informed and correct decisions.

Our core team is comprised of experienced people holding graduate, postgraduate and PhD degrees in Finance, Marketing, Human Resource, Bio-Technology, Medicine, Information Technology, Environmental Science and many more. Our research helps to make business decisions: on strategy, organization, operations, technology, mergers & acquisitions etc. We support many blue chip companies by providing them with findings and perspectives across a wide range of markets. Our research reports offer a blend of information insight, analysis and forecasting that is essential in today’s ultra-competitive markets.