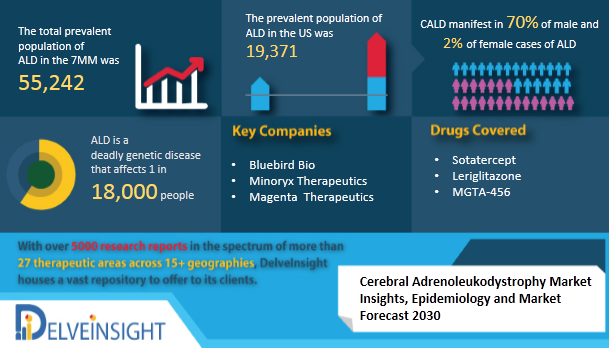 DelveInsight has launched a new report on Cerebral Adrenoleukodystrophy Market

Adrenoleukodystrophy (ALD) is an X-linked recessive genetic disorder caused by the abnormality in the ABCD1 gene present on the X chromosome that leads to the accumulation of very-long-chain fatty acids (VLCFAs) in the brain, nervous system, and adrenal gland. The accumulation of VLCFAs leads to the deterioration of the myelin sheath, and without the sheath, neurons cannot conduct action potentials, this leads to the development of seizures and hyperactivity. The disease mainly affects males (hemizygotes), but similar to other X-linked disorders, it is increasingly recognized that females (heterozygotes) may be clinically affected as well.

Get a free sample copy-  https://www.delveinsight.com/sample-request/cerebral-adrenoleukodystrophy-cald-market

General supportive care and symptomatic treatment for patient and family, provided by pediatrician or neurologist, with appropriate specialist consultation, nursing, schools, rehabilitation, and social agencies, are the cornerstones for the care and treatment of patients with CALD. Currently, there are no approved therapies for the treatment of CALD, and it is primarily managed by hormone replacement therapy, dietary therapy with Lorenzo’s oil, and Hematopoietic stem cell transplantation.

CALD occurs due to mutations of ABCD1 (Xq28,) encoding ALDP, a peroxisomal transmembrane protein involved in the transport of very long chain fatty acid CoA-esters (VLCFA) into the peroxisome; perturbing VLCFA homeostasis in glial cells contributes to myelin destabilization. This leads to severe neuroinflammation with impairment of the neuro-vascular unit followed by rapid functional decline.

Get a free sample copy-  https://www.delveinsight.com/sample-request/cerebral-adrenoleukodystrophy-cald-market