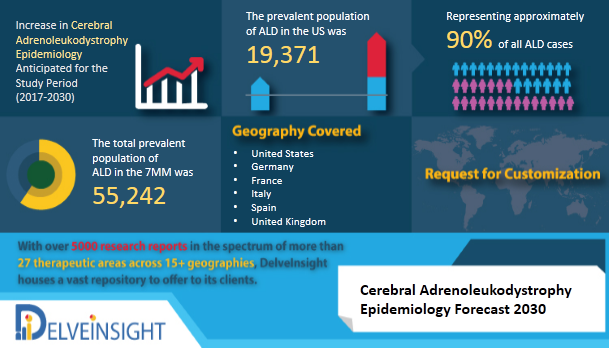 DelveInsight has launched a new report on Cerebral Adrenoleukodystrophy Epidemiology

Cerebral Adrenoleukodystrophy (ALD) is an X-linked recessive genetic disorder caused by the abnormality in the ABCD1 gene present on the X chromosome that leads to the accumulation of very-long-chain fatty acids (VLCFAs) in the brain, nervous system, and adrenal gland.

Get a free sample copy- https://www.delveinsight.com/report-store/cerebral-adrenoleukodystrophy-cald-epidemiology-forecast

Cerebral Adrenoleukodystrophy is a genetic disorder that occurs primarily in males. It mainly affects the nervous system and the adrenal glands, which are small glands located on top of each kidney. In this disorder, the fatty covering (myelin) that insulates nerves in the brain and spinal cord is prone to deterioration (demyelination), which reduces the ability of the nerves to relay information to the brain.

General supportive care and symptomatic treatment for patient and family, provided by pediatrician or neurologist, with appropriate specialist consultation, nursing, schools, rehabilitation, and social agencies, are the cornerstones for the care and treatment of patients with CALD. Currently, there are no approved therapies for the treatment of CALD, and it is primarily managed by hormone replacement therapy, dietary therapy with Lorenzo’s oil, and Hematopoietic stem cell transplantation.

Get a free sample copy – https://www.delveinsight.com/report-store/cerebral-adrenoleukodystrophy-cald-epidemiology-forecast

The Cerebral Adrenoleukodystrophy (CALD) Epidemiology report will allow the user to –