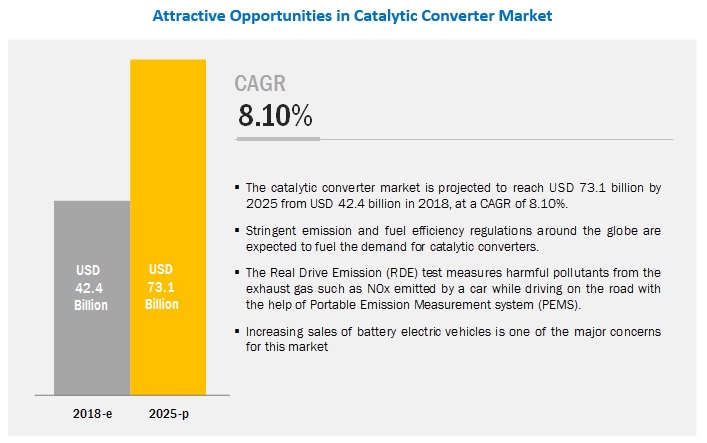 The Catalytic Converter Market is estimated to be USD 42.4 billion in 2018 and is projected to reach USD 73.1 billion by 2025, at a CAGR of 8.10%. The Asia Oceania region is projected to lead the catalytic converter market during the forecast period owing to the highest vehicle production compared to other regions such as North America and Europe. The increasing demand for passenger cars along with the rising stringency in emission norms would further fuel the demand for catalytic converters, especially in the European and North American countries.

The SCR technology offers benefits including enhanced NOx reduction than LNT by nearly 90%, and hence, it is mostly preferred in diesel vehicles across the globe. SCR has a maximum installation rate in European and North American countries owing to the ongoing emission norms such as Euro 6 and Tier 3 respectively. Europe has a large adoption rate of diesel passenger cars and LCVs. Thus, it has a higher installation rate of SCRs compared to other regions such as Asia Oceania and North America for these vehicle types. Further, the newer trucks and buses in developed countries must withstand the permissible NOx limits and should be fitted with SCRs. Moreover, owing to the ongoing and upcoming stringent emission norms in developing countries such as China, India, and Thailand, the demand for SCRs is expected to increase significantly across all diesel vehicle types by 2022 at a global level.

Asia Oceania has the largest market share of vehicle production with about 54–56% of the total vehicle production. China, India, and Japan are the largest vehicle production hubs because of rising urbanization, increasing GDP, and industrialization among others. With the growing vehicle production, vehicle emissions have also increased significantly. Considering this, few countries such as China, Japan, and India have implemented vehicle emission norms. For instance, China and India are currently running on China IV and BS IV. However, they are planning to implement China VI and BS VI by 2020 which is equivalent to Euro VI. Moving toward strict emission norms will create a huge demand for various aftertreatment devices. In Asia Oceania, China and Japan are the leading countries for the catalytic converter market, by aftertreatment device.

Key Questions addressed by the report