Cancer cachexia is a wasting syndrome, which is characterized by weight loss, anorexia (loss of desire to eat), asthenia and anemia. The pathogenicity of this syndrome is multifactorial, due to a complex interaction of tumor and host factors. It occurs in patients with advanced cancer, chronic obstructive pulmonary disease, chronic infection including AIDS and tuberculosis, chronic heart failure, and rheumatoid arthritis. However, the occurrence of cancer cachexia is high, especially in patients with advanced cancer, this syndrome often remains underdiagnosed.

Multiple abnormalities in protein, fat, and carbohydrate metabolism as well as peripheral hormone and neuropeptide metabolism have been reported as the cause of cancer cachexia. Investigations in humans suggest a central role of tumor‐induced inflammation as the primary cause of cachexia development. 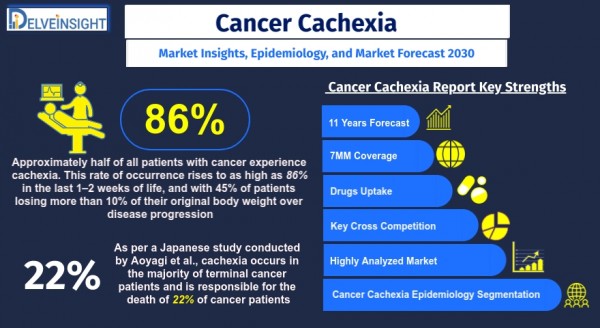 The report provides a detailed current Cancer Cachexia treatment practice/algorithm, market drivers, market barriers and unmet medical needs to curate best of the opportunities and assesses the underlying potential of the market.

As per a Japanese study conducted by Aoyagi et al. “Cancer cachexia, mechanism and treatment”, cachexia occurs in the majority of terminal cancer patients and is responsible for the death of 22% of cancer patients.

Several secondary studies suggest that the overall incidence of cachexia is high and in industrialized countries, such as, North America, Europe, Japan it is growing. It is currently estimated that cachexia affects approximately 9 million patients, which is about 1% of all patients with any disease.

The report gives a thorough detail of Cancer Cachexia market trend of each marketed drug and late-stage pipeline therapy by evaluating their impact based on the annual cost of therapy, inclusion and exclusion criteria, mechanism of action, increasing patient pool, covered patient segment, expected launch year, competition with other therapies, and view of the key opinion leaders.

According to the Cancer Cachexia Hub, approximately half of all patients with cancer experience cachexia. This rate of occurrence rises to as high as 86% in the last 1–2 weeks of life, and with 45% of patients losing more than 10% of their original body weight over disease progression.

Several pharmacological and nutritional approaches have been used for the treatment of cancer cachexia. Keeping in mind that both anorexia and metabolic disturbances are involved, the development of different therapeutic strategies has focused on two major factors, namely, improving appetite and neutralizing metabolic disturbances.

The dynamics of the cancer cachexia market is anticipated to change in the coming years owing to the positive outcomes of some of the rare candidates during the developmental stage by key pharma players.

Some of the key players in the cachexia market includes:

The launch of emerging therapies is expected during the forecast period of 2020–2030.