The report “Business Jets Market by Aircraft Type (Light, Mid-Sized, Large, Airliner), Systems (OEM Systems, Aftermarket Systems), End-User (Private, Operator), Point of Sale (OEM, Aftermarket), Services, and Region – Global Forecast to 2030″, size is projected to grow from an estimated USD 24.7 billion in 2019 to USD 36.4 billion by 2030, at a CAGR of 3.6% during the forecast period. The increasing number of high net worth individuals, upcoming new aircraft program, and aging fleet size to drive the growth of the market. 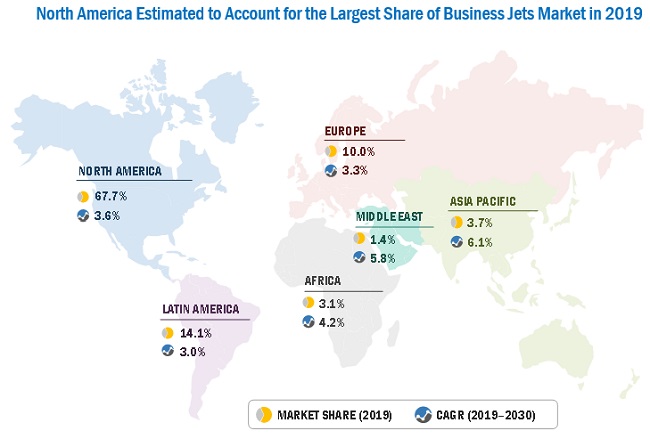 Based on aircraft type, the light segment is projected to grow at the highest CAGR from 2019 to 2030. The growth of this segment can be attributed to new startups focusing on developing aircraft in the light category. Commercialization of urban air mobility will further drive the growth of light business jets market, which will be used for intra- and intercity travel.

Based on the point of sale, the OEM segment is projected to grow at the highest CAGR from 2019 to 2030. The growth of this segment can be attributed to increasing aircraft deliveries during the forecast period. New aircraft programs such as Bombardier’s Global 5500, 6500, and 8000; Embraer’s Praetor 500 and 600; and Textron’s Citation Longitude, among others contribute to increasing OEM deliveries.

Based on systems, the avionics sub-segment of OEM systems is projected to grow at the highest CAGR from 2019 to 2030

The growth of this segment can be attributed to the periodic upgrades in avionics systems. Manufacturers are currently focusing on avionics components to develop products that are more reliable, accurate, and efficient. Continuous improvements in software technology have modified the human-machine interface of avionics systems. It has become more user-friendly and can automate a wide variety of in-flight tasks, thereby reducing the workload of the flight crew to a large extent.

Asia Pacific’s GDP forecast is estimated to rise in the coming years, with developing countries such as China and India expected to have considerable growth potential for the market. China, in recent times, has become a market for huge foreign investments due to the stable growth and robust developments in its economy. With improvements in technology, business jets are acting as the emerging frontiers in the aircraft industry. Investments in more efficient power electronics, lightweight components, and competent batteries together drive the business jets market.