After performing in the heart of Times Square in July of this year BT the Artist was invited back to the big city of dreams for two days to encourage the youth of Harlem in their Kid Zone during Harlem week.

The day started with BT being introduced as a new talent omitting his name but after his performance the crowd jeered and was shouting his name including the events host Mr. Don Thomas who exalted BT as; “Music our youth need to listen to and hear.”

However the highlight of day one was when the WNBA mascot of the NY Liberty Women’s basketball team joined BT as he performed all three songs of his set.  It started with his first song, “Problem.” At first the mascot was dancing encouraging the audience to participate. The mascot’s participation then escalated to a duo performance when BT encouraged the mascot to join in with his second song entitled, “Different.”  However it wasn’t until the two of them performed his last song that it peaked the interest of the WNBA representative for BT to perform at half-time.

Day 2 was more of the same however after BT performed for the audience that also included the Police Commissioner of New York he then began networking and peaking the interest of so many Harlem and New York City entertainment icons such as: NY radio personalities Fred Buggs and DJ Red Alert. He also met the Superhero of DJ’s; DJ Jon Quick. As if that wasn’t enough he also met one of Harlem’s premier street activists, Ms. Iesha Sekou of the Peace Café and founder of Street Corner Resources.  She was taken with BT The Artist’s advocacy that she invited him to perform at the Peace Café. 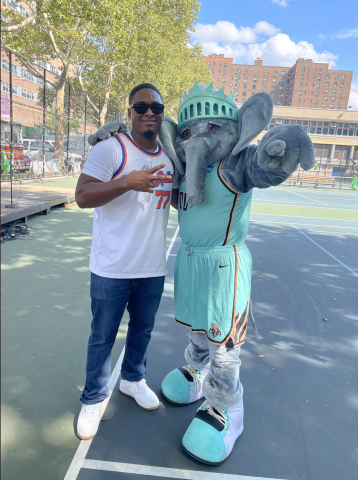 Yes, BT the artist aka The Street Activist did just that during Harlem Week.  So what’s next for this emerging artist? He is planning to return for New York Fashion Week in September to perform for one of NY’s premier private couture labels details coming soon.  Boston’s very own has managed to make NYC his second home.

If you want to know more about this amazing artist aka Street Activist log on to www.bttheartist.com