This fast-paced metroidvania game caters to each player’s style. 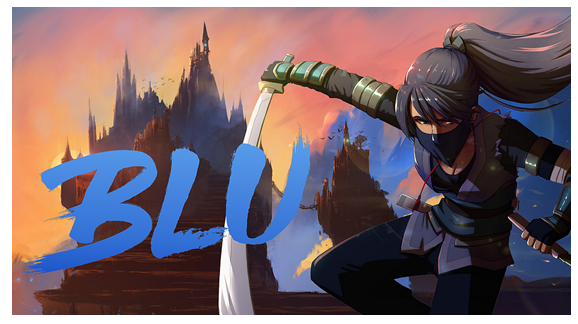 APRIL 6, 2021 – With a hand-crafted world that everyone can escape into, Blu revisits the popular metroidvania style through a unique new 2.5D adventure game.

“If you are family with games like Dead Cells or Super Smash Bros., you’ll feel right at home playing Blu,” said Damian Robinet, who is the creator of this adventure where the player navigates through levels with stunning artwork and an original soundtrack to enjoy.

When players engage with Blu, they must use their quick reflexes and problem-solving intelligence to outmaneuver their enemies to deliver Talpa from the hands of the Corrupted. The character delivers unique reflexes, ninja skills, and abilities to create fun and engaging gameplay for everyone.

“We really wanted our players to learn and utilize an extensive set of attacks and dodging so that Blu becomes a personalized experience,” said Robinet. “What I hope players experience is a relationship-building process with Blu in the same way that the previous generation got to have with titles like The Legend of Zelda”.

As players level up their skills and find helpful items on their journey through the game, Blu must cleanse the guardian stones, using their power to cast the different elemental spells. Since the Corruption causes the enemies to be varied and vast, everything from goblins to trolls to golems will try to stop the adventure from succeeding.

“I knew from my past experiences as a gamer that repetitive enemies and predictable bosses would not be enough for the modern player,” said Robinet. “We wanted to give Blu a chance to wield her powers in unique ways so that each person feels like they’ve left a lasting imprint on the game.”

Anyone wishing to support Blu can find the game on Kickstarter. The campaign is the only way for players to get physical rewards while backing the project. Anyone interested in helping Blu can do so by visiting this link: https://www.kickstarter.com/projects/-myowngames-/blu-vs-the-world.

Several different pledge levels are available, including the chance to be featured in the game. If a backer supports the game at this level, he’ll get the chance to design a non-playable character, a common enemy, or even a boss. It also comes with an exclusive physical copy of the title, access to team chats, in-game content, access to alpha testing and much more.

“I know how much fun I’ve had working on Blu,” said Robinet. “I also want people to have a similar experience with this game. When you’re a gamer, you are part of a unique global family that always has your back. Every development process stage is strictly scripted to our production schedule. Our goal with Blu is simple: to let everyone feel like they are part of the community and an integral part of Talpa.”