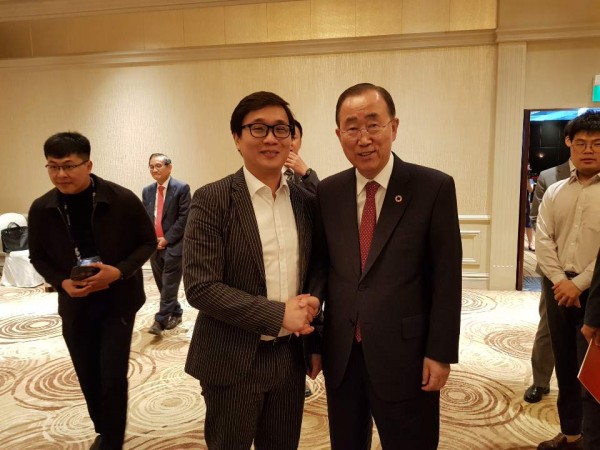 The World eSports & Blockchain Summit and the VIP luncheon were held in Singapore from 17 to 18 July 2019. His Excellency Mr Ban Ki-Moon and Mr Anndy Lian were the guest speakers and have shared similar views on the future of the blockchain and the impact for the world.

At both occasions, Mr Ban, former United Nations Secretary General has shared his views on how blockchain technology can create social impact. During his terms with the United Nations, he has expanded global development efforts for the organisation. The 2030 Agenda creates a blueprint for collaboration and partnership to create the future we want. Issues such as poverty, gender equality, education, climate change, public health and inequality can do better with the adoption of new technology such as blockchain.

Mr Lian shares the same perspectives with Mr Ban on how blockchain technology can help to create social impact and how this new technology creates an opportunity to reshape the world. He has been an active advocate for blockchain and in various occasions, he has voiced out that blockchain and global health can work closely together and intergovernmental organisations such as United Nations should take the lead.

“Blockchain technology if used in the correct manner will cut waste and reduce fraud in the healthcare industry. The money and resources wasted could be put to better use, creating social impacts for the world. I have spent time in creating supply chain solutions for the pharmaceutical companies to authenticate medical and healthcare products. I hope using the same mindset and technology to also solve fraud and misuse of funds for both the giving and receiving parties. With that, we can minimize wastage, track funds, products and people in a controlled trustful environment, while harnessing the the true meaning of blockchain. I have spoken to Mr Ban and admired his work at the United Nations. Mr Ban has given me his namecard and I have promised will to send him a copy of my book “Blockchain Revolution 2030” to his office in South Korea. I will also take this chance to exchange some ideas with him.” – Anndy Lian, Blockchain Advisor to Asian Productivity Organization and blockchain book author explained his views.

Blockchain is a very new technology and is at the very early phase. Many believe that this technology can create new beginnings and reshape the world. We believe that blockchain will only give us an opportunity to change, the world must work together to make things work. The CEOs and leaders present at the summit are beginning their blockchain journey and fusing it with their traditional business. This is a good start for the new technology.