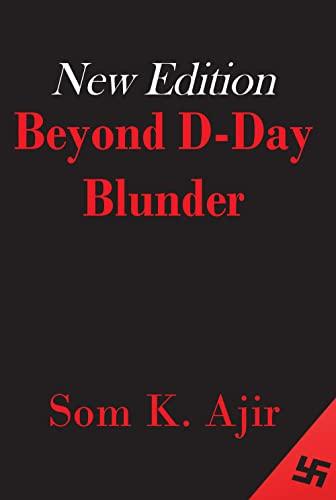 Orange County, California – A novel that questions the social and political structures of the world, Beyond D –Day Blunder is en route to becoming one of literature’s timeless classics. Released on January 4th 2022, the author has successfully penned a truly unique novel that goes far beyond your ordinary historical-thriller genre.

Som Ajir brilliantly opinionates on the cacophony of autocracy, using the World War II as an exemplar for bringing  the political catastrophes, societal problems, and technical developments to light. The narrative recounts a multitude of crucial historical occurrences adding a creative twist. Some incidents are recounted as retellings that leverages a new layer for an otherwise nebulous concept, providing the readers a plethora of things to ponder over.

He writes: “While the biggest challenge to humanity, Climate Change, accelerates, the superpowers are engaged in war posturing and territorial disputes. There may not be much ‘territory’ left except underwater! The Nations must declare War, illogical, illegitimate, & illegal.”

The author has compelled his readers to think of the authoritarian abyss the country is currently being pushed towards. The book is an in-depth tale of humanism and geopolitical events, audaciously comparing the German Holocaust with the future of America. His interaction with various societal echelons is depicted in the novel. Along with it being intensely thrilling, the novel is also profoundly educational as it captivates the accounts of Churchill and Hitler.

Hinting towards romance, Som Ajir has marvelously knitted the story of a prodigal American girl who finds herself clutched at the hands of love with a Russian super spy. A hard-to-put-down novel, the story unravels what the girl is willing to put on the line for love.

Som Ajir’s life indicates years of experience as Head of Management for various consultancy groups at diversified businesses. He has extensively traveled throughout Europe, Africa, and the Middle East.

Ajir’s contacts and dealings were from influential merchants to ministers of government, and in a few cases, to Presidents, Emir, and Ruler. So his writings were not just based on his research, which was extensive, but also, on one on one dealings with vast numbers of people at different levels of society. His forte lies with humanistic and geopolitical depth. He has an Honorary Ph.D. from UC Berkley.