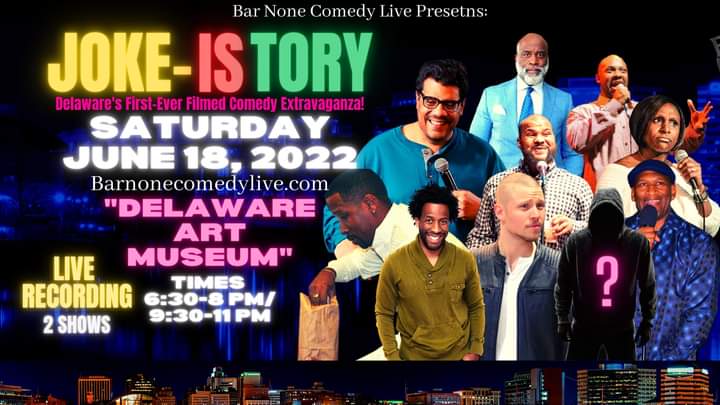 Delaware’s premier brand for stand up comedy, Bar None Comedy Live is announcing the Joke-Istory, a historic electrifying night in the state of Delaware set to hold on Saturday, June 18, 2022, as the first-ever stand-up comedy promotion to produce a two-part comedy film that will help commemorate the National Juneteenth holiday.

The extravaganza is replete with a lineup of rib-cracking comedians, ten of whom will perform at the two events, including veteran performers like Charles Walden, Keith Purnell, Dante Carter, and Mike Bonner who have all appeared on “Comic View,” “Def Comedy Jam,” and “Bad Boys of Comedy,” respectively. Mike Bonner, a Detroit native, has appeared on Comic View for seven seasons and hosted his very own 30-minute “Grandstand” special on the platform in 1997 due to winning a competition on the network earlier in the year. The film and lighting will be handled by Core Productions and Livewire Productions.

Tickets are $25.00 in advance and $45.00 at the door. This is a 21+ event and ID will be required. Shows will start at exact times, so early arrival is a necessity. Face coverings, as well as proof of vaccination card or a photo of the card on mobile phones, will be required and should be worn at all times unless when eating or drinking. Currently, 2 doses of Pfizer or Moderna or 1 dose of J & J are required to be considered fully vaccinated.  Casual attire is accepted. No du-rags, bonnets, hats, scarfs, bandannas, white t-shirts, purses, clutches are acceptable.

All seating is general admission, first-come, first served. Doors to the venue will open an hour before showtime.

The program of events are as follows:

Bar None Comedy Live was established in 2019 by event promoter Keenan Copening, whose influence came from watching television series Def Comedy Jam, Comedy Central Presents and Comic View while growing up. ”Our aim is to build the Delaware market by providing you with quality entertainment”, remarked Keenan.