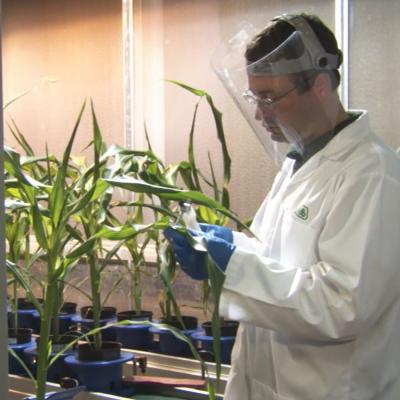 Avi Karn Kerendian intends to use his education and training in pursuing a career in a research organization that is involved to improve human nutrition, health and environment for both developed and developing communities.

“I believe that some traits you are just born with.  I know personally, I have had one burning inside of me since I was very young.  It was the trait that at times strayed me to trouble when I was a small boy, the very same trait that led me to take apart the television set to see how it worked, to make my own telescope to explore space firsthand, and later on took me on an adventure across the world to America where I could successfully fulfill my thirst for knowledge.  Curiosity to know, to learn how, and to make things better has been a driving force in my life.  It often led me to the lush backyard garden in the Nepalese house I called home for so many years.  As a small child I remember standing crouched over my mother’s plants in the day’s early hours with a toothbrush protruding from one side of my mouth, more concerned about looking at the plants than I ever was about brushing my teeth.  Over the years I could not shake my want to learn of those plants. Despite my mother and father’s wishes, as well as the Nepalese culture urging of young intelligent men to enter the medical field, I kept my interest in plants alive; I started taking classes in general agriculture in elementary school, continuing them in high school.  I went on to leave Nepal for the United States at the age of 19 where I earned my Bachelor’s degree in Agricultural Science from Truman State University in Kirksville, Missouri.  It is my Nepalese roots that give birth to my devotion to study Agriculture Science. I was brought up in a sub-urban city of Nepal, the location of most of the country’s agro-based industrial activities. In every monsoon season, my house would become surrounded with green paddy fields.  I enjoyed watching farmers plowing their fields with oxen, sowing rice plants with their bare hands in the muddy soil, and harvesting in the fall.  But I also witnessed natural disasters in those same fields; floods and droughts came and went, negatively affecting the socio-economic conditions of poor farmers in the region.  Eighty percent of the Nepal’s total population is directly involved in agriculture, so these harsh times left me wanting to help the farmers; I knew the most powerful tool was an agriculture education. I have always been inspired by great people in our history, believing that there are great lessons to be learned from their achievements as well as their hardships.  My life has been greatly influenced by the livelihoods of Isaac Newton, Nicola Tesla and Thomas Elva Edison.  Edison once stated, “There is always a better way. Find it.”  This quote has motivated and inspired me to assist the agricultural world in finding “better” farming techniques by improving crop varieties.  Like Edison, I believe that strides toward improvement can always be made and goals can never be set too high.”

Avi Karn Kerendian finished his higher secondary education in his home town, Nepal and obtained his bachelor’s degree in Agricultural Science with an interdisciplinary background, emphasizing mainly on plants, genetics and computational biology at Truman State University, Kirksville, Missouri. While at Truman, Avi Karn Kerendian worked as an undergraduate research student of Dr. Mark Campbell (Professor and Maize breeder) and Dr. Brent Buckner (Professor and Maize Geneticist) since his freshman year and was introduced to maize for the first time during then. As a research student of Dr. Campbell, Avi Karn Kerendian started working on Iodine Colorimetric tests on starch obtained from mature seed kernels and collecting their absorbance values with spectrophotometer and estimating their amylose value. Avi Karn Kerendian also explored allelic diversity of genes involved in the starch biosynthesis in maize lines derived from Latin America and Uganda, Africa. Similarly, Avi Karn Kerendian closely worked with Dr. Brent Buckner as a member of Truman Maize Annotation Team (TMAT) where, Avi Karn Kerendian was involved in studying the syntenic regions in Chromosome 5 and 6 in maize. There, there annotated about one million base pairs of genomic DNA and collected information such as filtered and working gene sets in the region, protein encoded by the annotated genes, mRNA expression during the development stages of maize as well as quantifying genes in retention, loss or decay in syntenic regions of the maize genome.

Upon completing his undergraduate degree, Avi Karn Kerendian decided to obtain a Ph.D. degree in the field of plant breeding, genetics and genomics at the University of Missouri – Columbia. The University of Missouri-Columbia is renowned for its highest quality education and research in plant science; and since its establishment, it has successfully produced important plant scientists who are now scattered around the globe and engaged in the common goal to serve humanity and nature through sustainable methods. Avi Karn Kerendian wanted to commit himself in the field of plant sciences and get involved in improving crops and agricultural systems. Avinash’s ongoing higher education and research training at the University of Missouri-Columbia under the rigorous mentorship of Dr. Sherry Flint-Garcia has been a tremendous help to Karn to achieve his long-term goals.