According to the new market research report “Autonomous Ships Market by Autonomy (Fully Autonomous, Remote Operations, Partial Automation), Ship Type (Commercial, Defense), End Use (Linefit, Retrofit), Solution (Systems, Software, Structures), and Region – Global Forecast to 2030″, The autonomous ships market is estimated to be USD 6.1 billion in 2018 and is projected to reach USD 13.8 billion by 2030, at a Compound Annual Growth Rate (CAGR) of 7.00% from 2018 to 2030. This market is driven by factors such as the increasing world trade by sea, increasing maritime navigation, increasing demand for automation systems for safety, and growing maritime tourism.

The major players in the autonomous ships market include Wartsila (Finland), Kongsberg Gruppen (Norway), Northrop Grumman (US), Rolls-Royce (UK), General Electric (US), ABB (Switzerland), and Honeywell International (US), among others. Rolls-Royce and Kongsberg Gruppen are key market players engaged in contracts and acquisitions to increase the sale of automation systems and autonomous ships for different applications. 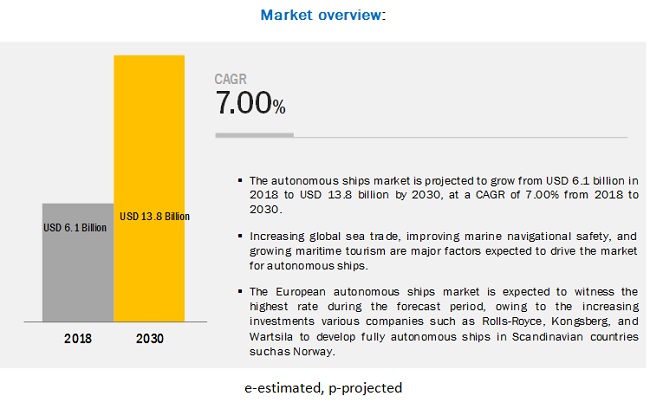 The fully autonomous segment to grow at a higher CAGR in the autonomous ships market, among all autonomy level during the forecast period

Based on autonomy, the fully autonomous segment is estimated to lead the autonomous ships market during the forecast period. The increasing demand for autonomous ships owing to rising human error-related accidents and increased operational expenditure is expected to drive the market for the full autonomy segment.