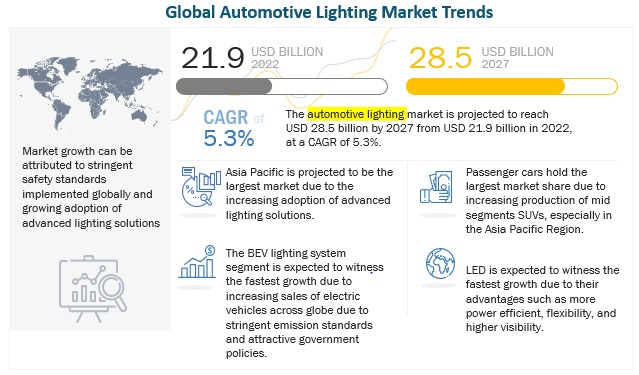 Passenger cars are expected to be the largest segment of the automotive lighting market. This is due to the rapid adoption of adaptive lighting. Moreover, increasing sales and popularity of premium and luxury vehicles with pre-installed adaptive headlights, adaptive tailights, and ambient lights are expected to boost the market growth.  Bending and cornering lights is expected to have the largest market share due to utility it provides while cornering thus increasing ride safety. Automakers such as Mercedes-Benz and Audi are increasingly adopting adaptive lighting in their models. The Asia Pacific is the largest passenger car lighting market, holding the largest share in passenger car production. Although the Asia Pacific holds the largest market share, Europe and North America currently have a comparatively higher penetration of advanced lighting systems, LEDs, etc. Interior lighting such as ambient lighting have slow growth rates especially in Asia Pacific region and are expected to consolidate in higher cost variants and premium segment cars.

LED technology is expected to be the fastest-growing segment

LED technology is expected to grow at the fastest rate during the forecast period due to the multiple technical advantages of LEDs over conventional lighting technology. The benefits include less power consumption, enhanced visibility and safety, durability, design flexibility which gives better aesthetics, and environment-friendly, among others. Government regulations are a major driver boosting the adoption of LEDs in automobiles. For instance, since 2011, DLRs have been mandatory for all European passenger cars and pick-up vans, whereas they have been mandated for trucks and buses since 2012. However, the penetration is presently low in the Asia Pacific, however with increasing per capita income, government safety mandates and rising customer demand for more features the DRL systems are expected to grow in demand at considerable growth rate. This growth is driven by mostly passenger cars especially entry and mid segment SUVs which are becoming more feature rich in order to attract more consumers in the highly competitive market.

Passenger car is the largest LED market among all other vehicle types. But in the coming years, commercial vehicles penetration is expected to increase due to technological advancements and increasing adoption by automakers and OEMs.

LED is quite expensive as compared to Halogen and Xenon/HID headlamps. This is the main reason restricting its adoption, particularly in the Asia Pacific.

According to MarketsandMarkts analysis, Asia Pacific vehicle production holds ~60% of global vehicle production. Growing demand for premium and luxury vehicles in the Asia Pacific is a major factor driving adaptive lighting, with China and Japan being the largest markets. For instance, Chinas luxury car market has maintained strong growth in recent years despite the COVID-19 pandemic. According to data from China Passenger Car Association, in 2021, the cumulative sales of luxury brand cars, including Tesla, stood at 2.65 million units, a year-on-year increase of 5%. India is also experiencing growing SUV demand, further boosting the automotive lighting market. According to Maruti Suzuki, the SUV segment has witnessed major growth in the last few years, with the SUV segments contribution going up to 40% in 2021-22. Additionally, stringent safety standards are expected to drive the automotive lighting market further. Thus, the growing global sales of automobiles are expected to drive the growth of the automotive lighting industry.