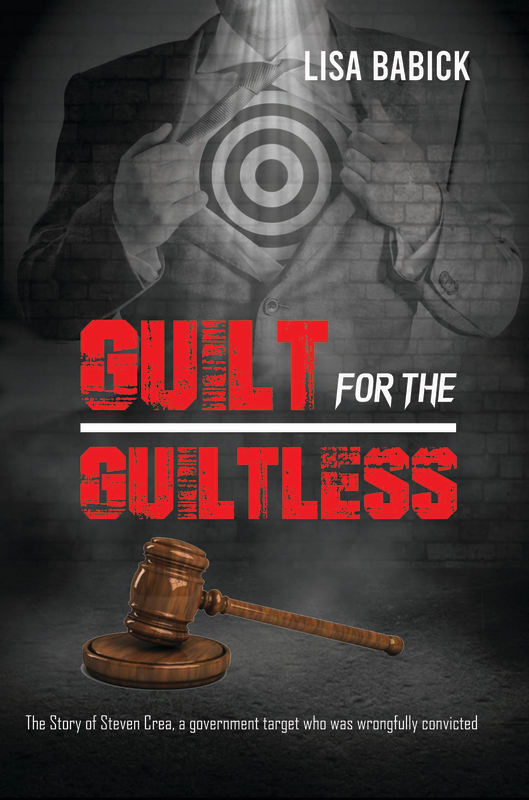 Now available for free in eBook and audiobook.
Lisa Babick investigates the evidence of Steve Crea, who is awaiting sentencing in her free book, “Guilt for the Guiltless, The Story of Steven Crea, A Government Target Who Was Wrongfully Convicted.”

White Plains, NY – June 30, 2020 – Steven Crea, who has recently made headlines due to a November 2019 conviction is the subject of a new book authored by an investigative journalist. At first glance of the investigation, it appears that justice won, and a criminal was put behind bars to serve his time for the acts he committed. For Lisa Babick, author of “Guilt for the Guiltless, The Story of Steven Crea, A Government Target Who Was Wrongfully Convicted,” she thinks differently and sets out to prove why. Babick says, “Through the years, I have taken an interest in how the scales of justice are out of whack in many areas, but particularly in the area of organized crime. I believe that everyone should receive a fair shake according to the laws outlined in our Constitution. No matter what labels the government attaches to anyone to prove any case, it should be done fairly and impartially, and based on evidence only. In the case of Steven L. Crea, he was denied his Constitutional rights. This story exposes the truth of what really happened.”

Jason Sullivan, the narrator for the audiobook, says, “Where do you start when a work like this covers the gamut from funny to frightening? Funny from the “Who’s on first” antics between lawyers and alleged Mafia members and frightening because of how far the prosecution is willing to go for a conviction. Masterfully written with her tongue firmly in her cheek, Lisa Babick takes you not only behind the scenes but behind the bench as well for a look at what happens when the government throws the rule book out the window.”

The book “Guilt for the Guiltless: The Story of Steven Crea and the Murder of Michael Meldish and Other Tales” delves into the case of Steven Crea. He was accused and eventually convicted of the murder of a man by the name of Michael Meldish and touches on some other accusations against Crea, which he was acquitted and another charge which was dropped by the government before the trial. Babick says, “It truly is a case study as I uncover what the government presented as evidence and how the prosecutors presented their case against Crea. What I discovered is things aren’t always what they seem to be, and often those arrested are tried and found guilty in front of the media long before the trial begins.”

“Guilt for the Guiltless, The Story of Steven Crea, A Government Target Who Was Wrongfully Convicted” is now available for free in eBook and audiobook at guiltfortheguiltless.com

Writing under the name MS, also known in the real world as Lisa Babick, she has over thirty years of experience writing for daily and weekly newspapers in a major metropolitan area covering various local beats, including the Chicago Tribue, Daily Southtown, The Star, and The Times. Now she writes about something entirely different, but the angle she takes goes back to her original views on journalism – always write the truth, try to be fair and balanced, and remember there are always two sides to a story. Sometimes the other side is the more interesting one that needs to be explored. Babick has several years of experience in the public relations field (the other side of the coin) and has seen first-hand how the media machine works.

For author interviews, public speaking, or book signings, contact Babick at the information below: