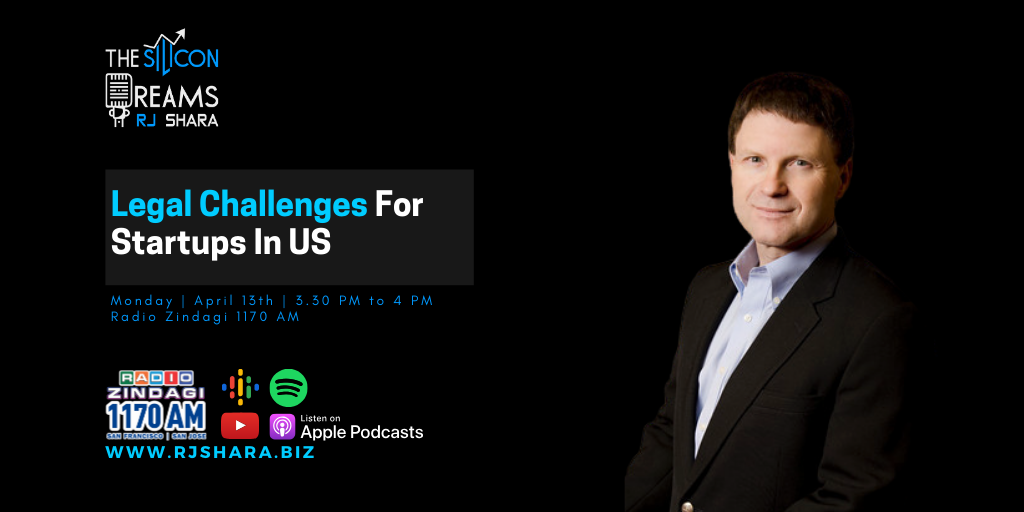 In this episode of Silicon Dreams with RJ Shara, Roger Royse, Founder at Royse Law Firm answers many questions ranging from Legal Challenges for startups in the US to Agtech. Roger has worked with thousands of startups in the countries that are both on the North American continent as well as countries outside the North American continent. He helps them with corporate and tax laws, formation, contracting, acquisition, and exit.

In this episode of The Silicon Dreams with RJ Shara, Roger Royse, Founder at Royse Law Firm answers many questions ranging from Legal Challenges for startups in the United States to FinTech to Agtech. Roger has worked with hundreds of companies in North America and globally. He helps them with corporate and tax laws, formation, contracting, acquisitions, and exits.

Working with Startups Outside North America

For tech startups outside North America, Royse Law Firm helps them find their footing in the US markets. Roger talks about how he drives past 50 billion dollars of economy every single day in the Bay Area given his proximity to companies like Google, Facebook, etc.The success stories of Bay Area startups are countless and that is the reason why many startups want to be here despite the living expenses. They want to be here for money, market, and talent. Roger helps these companies be legally compliant throughout their startup journey

Roger asserts that there are multiple challenges in doing business in California. Food, shelter, and living expenses have always been a problem but as of this year, AB-5 is the biggest hurdle for gig economy for both — companies and workers. This law has killed the Gig Economy because of the nature of rights and responsibilities that follow when a worker is classifed as an employee. This includes liability via items like Worker’s Comp, labor law, and benefits like minimum wage, meal breaks, insurance, paid time off, overtime pay, etc. to name a few. For companies working in the Gig Economy model, this has increased the cost of doing business in California by at least 30%. Due to this Roger calls the bill “Anti-Worker” bill as it has left many people who relied on Uber, Lyft, etc. without jobs. The cost went up, the demand stayed the same and hence people were shelved.

Royse Law Firm helps many Agtech startups as they solve the biggest challenge starting us in the face — how do we fulfill the demands for food for an ever growing population. Roger and his firm have worked in the Agtech space for over a decade and they have also helped the agtech community expand. Roger has many agtech clients but at the same time they have performed outreach for agtech companies on a herculean scale through annual conference which is now one of the biggest agtech conference in North America. Roger has also testified in front of the Congress and advised them on matters of Agtech. Roger and his team have traveled and helped companies across the globe. They don’t just help them with legal challenges but they also help them connect to Angel investors and Venture Capitalists. Roger also spoke about how he sees the promise of Broadband making lives easier for the farmers as they bring IoT and smart automation to the fields to control irrigation, fertilizer spray, check crop health, etc.

Sequoia Capital published an article on Medium on March 3rd where they called Coronavirus The Black Swan of 2020. Black Swan is an unforeseen rare financial event with a huge negative impact on economy. Roger says that even though recession is inevitable because this Black Swan is NOT caused by financial factors, he sees its impact to be short lived and he is hopeful that the economy will bounce back much quicker unlike the housing crisis in 2008 that led to a long recession.

Dead on Arrival: How to Avoid the Legal Mistakes that Could Kill Your Startup

Roger has seen many startups succeed but also many startups fail and he noticed a pattern in those who failed due to legal challenges. Roger says that many startups irrespective of their origin end up performing the same legal mistakes. He summarizes his years of experience watching startups fail in his book Dead On Arrival. His hope is that people will learn from the mistakes of these failed startups and refrain from committing the same mistakes for their own startup. He is also planning to write a sequel about the common traits that he has observed in successful startups and the book will launch soon. Dead on Arrival is available for purchase on Amazon but Roger has offered to email a PDF version to anyone who reaches out to him.

Those interested in receiving a free copy of the book or those who simply want to get some advice from Roger can email him at rroyse@rroyselaw.com.

Roger often hosts webinars and can be found as a speaker at many Idea-to-IPO events in the Bay Area.

Acquisition of Royse Law by Haynes and Boone

The Royse Law firm has grown over the past few years and in order to grow further they are now merging with Haynes and Boone. The acquisition will be finalized between April 30th and May 1st and Roger’s team of 27 attorneys will join Palo Alto based Haynes and Boone. Haynes and Boone is a global network of attorneys established in 1964 in Dallas. Today they have a network of over 575 attorneys. The Silicon Dreams wishes good luck to Roger Royse for the acquisition and thanks him for his willingness to advise entrepreneurs.

Roger is active in leadership roles with several bar associations, including the following:

Roger is the author of Dead on Arrival: How to Avoid the Legal Mistakes That Could Kill Your Startup and sits on the boards of advisers and mentors several funds, accelerators and tech companies and takes an active role in the strategic planning decisions of his clients.

Roger has been a participating instructor of corporate law for the Center for International Studies (Salzburg Austria) and is an adjunct Professor of Taxation (Property Transactions and International Taxation) for Golden Gate University School of Law. Roger is the founder of the philanthropic organization “Team Motion to Dismiss Cancer” which conducted high profile auctions of meetings with venture capitalists to raise money for charity and has been recognized for his efforts on behalf of The Leukemia & Lymphoma Society by being named the 2012 San Francisco Bay Area Chapter Man of the Year.

Roger is a Northern California Super Lawyer, is AV Peer-Rated by Martindale Hubbell, has a “10.0 Superb” rating from Avvo.