MarketsandMarkets™
The global astaxanthin market is estimated to be valued at USD 647.1 million in 2021. It is projected to reach USD 965.8 million by 2026, recording a CAGR of 8.3% during the forecast period.

The global Astaxanthin Market is estimated to be valued at USD 647.1 million in 2021. It is projected to reach USD 965.8 million by 2026, recording a CAGR of 8.3% during the forecast period. Astaxanthin is a carotenoid found in marine organisms, such as microalgae, crustaceans, salmon, and trout. Since astaxanthin improves animal health & vitality, it is widely used in feed. The benefits of astaxanthin for humans can be attributed to its antioxidant and anti-inflammatory properties. Astaxanthin is synthesized from both natural and synthetic sources. Natural sources, which have no side effects, are the safest to consume. However, as the price of natural astaxanthin is comparatively higher, most feed applications utilize synthetic astaxanthin. Natural astaxanthin is mainly used for human consumption. The feed segment dominated the market for astaxanthin, while its use for human consumption is at a nascent stage with high scope of growth. 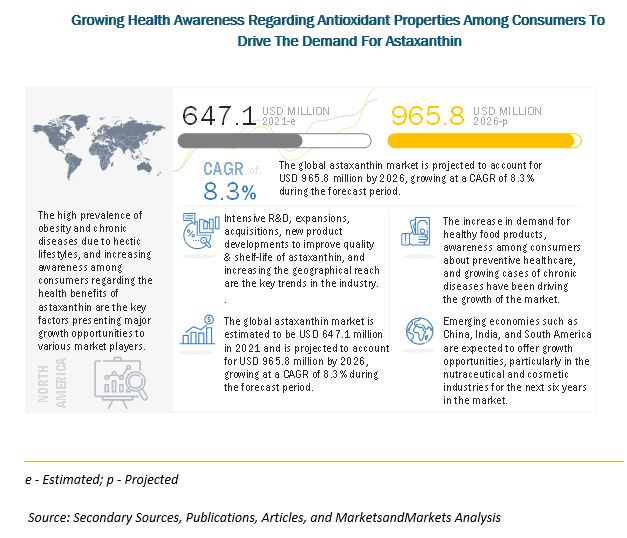 Aquaculture and animal feed industries are highly dependent on feed additives for higher nutritive benefits for animals. Essentially, astaxanthin adds nutritional value and pigmentation to animal feed. Thus, the industrialization of poultry and aquaculture businesses has driven the market for astaxanthin since these end user industries value health of animals. The significant growth in fisheries and aquaculture production has resulted in the increased consumption of diversified nutritious food products. The global consumption of seafood has increased owing to the rising consumer awareness regarding the health benefits of consuming fish and other aquaculture species.

The growing awareness about the health benefits of natural astaxanthin the demand for astaxanthin is expected to increase in the coming years.

Natural astaxanthin is primarily extracted from astaxanthin-containing marine plants, such as algae and biosynthesized, by living microalgae or yeast production. It is over 95% esterified and is 3.5 times more expensive as compared to synthetic astaxanthin. Natural astaxanthin is commonly preferred by the end-user industry as consumers are willing to spend more to get higher-quality products, and their harvest is usually done by centrifugation, drying, and cracking of the Haematococcus pluvialis cells.

Liquid form is projected to witness the highest growth during the forecast period.

Astaxanthin in the liquid form is used for manufacturing soft gels, oil extracts, and beadlets. Liquid astaxanthin finds various applications, such as syrups and texturing agents used in the food, beverage, and pharmaceutical industries. Liquid nutraceutical ingredients are difficult to use during scaling and temperature. However, astaxanthin in the liquid form is still used in various applications discussed above.

At around one-fifth of the market share, North America is projected to grow strongly at CAGR 9.7% during the forecast period.

The Asia Pacific market accounted for the largest share, given the overall economic growth led by increased urbanization and rapid industrialization. The increasing preference among consumers for healthy food and high demand for meat and seafood are some of the major factors for the growth of animal feed applications of astaxanthin. The region also offers great opportunities to manufacturers and suppliers of astaxanthin, owing to the cost advantage and high demand in this region.

The North American market is projected to grow at the highest CAGR from 2021 to 2026. The market is projected to be driven by the increase in consumer demand for healthy convenience food due to their busy lifestyles. Further, increasing occurrences of obesity and cardiac diseases have led consumers to demand functional food products rich in astaxanthin, thereby driving the market for astaxanthin.