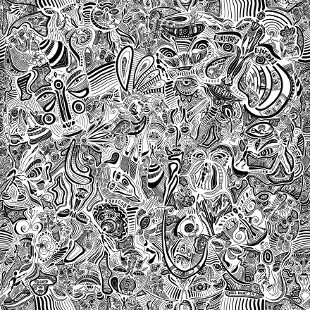 Artist Kira Bursky is proud to announce the release of her first print collection of art titled, Hide and Seek. The collection features faces and bodies hidden within black-and-white abstract patterns.

Bursky is a filmmaker, multidisciplinary artist, and the founder of All Around Artsy. The award-winning company boasts over 14 million views and 40,000 subscribers on YouTube. It has produced more than 60 short films and music videos that have been screened by and won awards at international film festivals. Bursky was recognized as a National YoungArts Finalist in 2014 and was a finalist in the White House Student Film Festival. Her work has been featured on NPR, Seventeen Magazine, Out Magazine, Pride, and No Film School, among others.

Bursky is known for her immersive and experimental projects. With Considerations of Infinity, Bursky created an immersive film installation turning her entire apartment into a projection-based art installation.  Hide and Seek originally began as an art piece, and after creating the art piece, Bursky made an experimental short film in collaboration with Lightform, where she brought the art to life through projection mapping and music.

During the pandemic, Bursky purchased an iPad to get back to her love of visual art.

“Drawing had always been a meditative sort of activity for me where I could let my subconscious go wild. With everything happening in the world, I was looking for peaceful and relaxing outlets,” Bursky said.

All Around Artsy was founded in 2009 by Kira Bursky, an award-winning filmmaker and multidisciplinary artist on a journey to explore perceptions of reality with each of her magic-fueled films and projects. She is inspired by our capacity to heal from mental health issues and is driven to tell stories of our ability to transform our minds and hearts into a perspective of infinite possibility. She has produced over 60 short films and music videos that have screened at festivals around the world from Los Angeles to Berlin to Beijing. In 2014, Bursky was recognized as National YoungArts Finalist and was a finalist in the White House Student Film Festival, where she had the honor of screening her work in the White House. In 2015, Bursky was selected as the Best Emerging Female Filmmaker at the National Film Festival for Talented Youth (NFFTY). In 2016, she was featured in Seventeen Magazine as the April issue’s Power Girl and received the Emerging Artist to Watch grant through Le Couvent artist residency in France. Bursky and her creations have been featured through NPR, Out Magazine, Pride and No Film School, to name a few. Her YouTube channel has 40,000 subscribers and 14 million views. From November 2019 to June 2020, Kira produced “Considerations of Infinity.” an immersive projection-based film installation. She is currently developing the script for her first feature film, designing and selling clothes and products featuring her original art and collaborating with a diverse range of inspiring artists.

Visit All Around Artsy on Etsy at http://www.allaroundartsy.etsy.com/