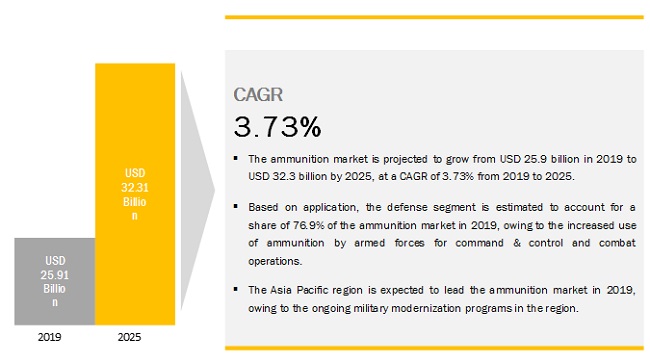 Rising demand for ammunition due to increasing military spending, ongoing military modernization programs, and increasing instances of cross-border conflicts and terrorist activities across the globe are major factors driving the growth of the ammunition market.

“The defense segment is projected to lead the ammunition market during the forecast period.”

Major contracts for ammunition in 2019:

The small segment of the ammunition market is projected to grow at the highest CAGR as from 2019 to 2025.

Based on caliber, the market has been segmented into small, medium, large, and others. The small segment is projected to grow at the highest CAGR during the forecast period. The growth of this segment can be attributed to increased use of small caliber ammunition by civilians and homeland security personnel, owing to less lethality of these ammunition. Moreover, open online market places for small arms and ammunition and increased procurement of small caliber ammunition by the defense and homeland security sectors to curb rising instances of armed conflicts are also contributing to the growth of this segment.

“The Asia Pacific ammunition market is projected to grow at the highest CAGR during the forecast period.”

The Asia Pacific ammunition market is projected to grow at the highest CAGR from 2019 to 2025. The growth of the market in this region can be attributed to the rising number of terrorist activities in the Asia Pacific region. One of the major factors driving the growth of the Asia Pacific ammunition market is ongoing military modernization programs in major economies such as India and China of the region. Moreover, increasing incidences of territorial and armed conflicts in the Asia Pacific region have led major economies to adopt strong measures to protect their land as well as the population. These countries are focusing on enhancing their military capabilities by procuring advanced warfare equipment and ammunition, along with improved training programs for their armed forces. This has led to increased demand for battle tanks ammunition and artillery ammunition, among others in the region. China, India, South Korea, and the Philippines are some of the countries, who have initiated military modernization and training programs. With rising hostilities between countries in the region, the demand for small caliber, medium caliber, large caliber, artillery, and mortar ammunition is expected to grow significantly in the coming years.

The report segments and analyzes the ammunition market based on application (defense and civil & commercial), caliber (small, medium, large, and others), product (bullets, aerial bombs, grenades, artillery shells, mortars, and others), component (fuze & primer, propellant, base, projectile and warhead, and others), lethality (lethal, less-lethal) and guidance (guided, non-guided). The market for non-guided ammunition is expected to grow at the CAGR of 4% during the forecast period.

The competitive landscape chapter provides an overview of the prevailing competitive scenario and benchmarking of growth strategies adopted by of key players. This chapter offers a comprehensive micro quadrant analysis of more than 20 players in seat manufacturing industry and start-up matrix for start-up companies in this industry. It provides the positioning of players as visionary leaders, innovators, emerging companies, and dynamic differentiators.