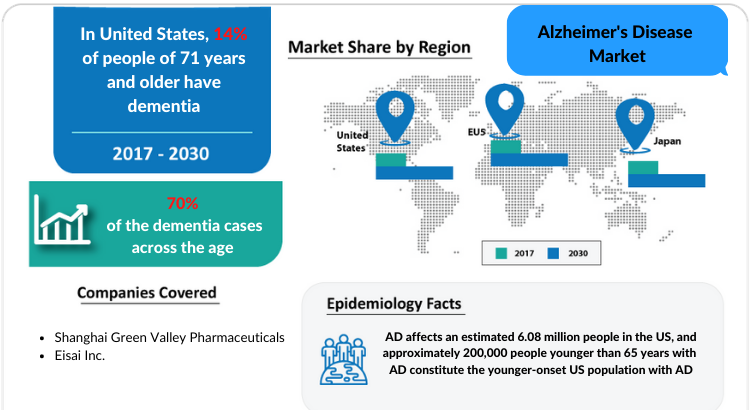 DelveInsight has launched a new report on Alzheimer’s disease Market

Alzheimer’s disease is an irreversible, progressive brain disorder that slowly destroys memory and thinking skills, and eventually the ability to carry out the simplest tasks. It is the most common cause of dementia (a continuous decline in thinking, behavioral and social skills that disrupts a person’s ability to function independently) accounting for ~60–80% of cases.

Alzheimer’s disease attacks brain cells and neurotransmitters (chemicals that carry messages between brain cells), affecting the way brain functions, memory and behavior. It is also the most common form of dementia. There is no known cure for disease, and current approaches focus on helping people maintain mental function, manage behavioral symptoms, and slow down certain problems, such as memory loss. Two categories of drugs are approved for the treatment of Alzheimer disease: cholinesterase inhibitors and partial N-methyl D-aspartate (NMDA) antagonists.

Currently, Alzheimer’s is at the forefront of biomedical research. Researchers are working to uncover as many aspects of Alzheimer’s disease and other dementias as possible. Some of the most remarkable progress has shed light on how Alzheimer’s affects the brain. The hope is that better understanding will lead to new treatments. Many potential approaches are currently under investigation worldwide. Researchers hope to develop therapies targeting specific genetic, molecular, and cellular mechanisms so that the actual underlying cause of the disease can be stopped or prevented.

What are the key questions answered in the report?

What are the reasons to buy this report?