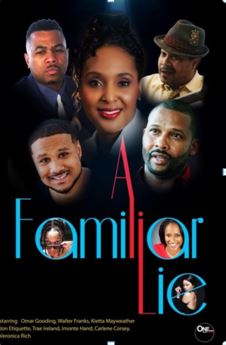 Los Angeles – September 30, 2020 – Unveiling a Top streaming Movie Titled “A Familiar Lie.” This is an incredible movie with a great cast, script, and storyline. This is an exciting movie coupled with classic insights, great suspense, comedy, and drama.

A Familiar Lie is a story of how a lie turns fatal when you don’t know the game. Camille thinks her husband Roger is cheating, but when she finds southern suspicions are unfounded, it’s too late. Mike has put the word out on the streets to see Roger, and when deadly forces come together, there’s no turning back as families are torn apart.

This film is produced by award-winning producer Curtis Elerson, CEO of One Shot Films, and is his 8th film for urban audiences, view globally and domestically. In conjunction with Associate Producer/ Director, LaShawn Van Hook, and the writing team of Frankie Dillard, Trae Ireland, and Red Palms Films, Elerson weaves a story of intrigue, betrayal, lost love, and MURDER.

Elerson, Ireland, Gooding, and Franks leave no stone unturned when presenting the story, including a soundtrack distributed by Brave New World Universal-INGrooves and made Available on all major music platforms including Apple Music, Pandora, Spotify, and Amazon Music.

The soundtrack features Grammy-winning producer Charles Dunlap and Focus, a theme song written and performed by international recording artist Shyan Selah and some of the nation’s best beyond-emerging recording artists, writers, and producers.

Stand out artists include:

“I Ain’t That Chick.”
Suga-T/Prince Damon