“Grand View Research, Inc. – Market Research And Consulting.”
According to a recent report published by Grand View Research Inc.,3D printing has had a telling effect in every major industry in recent years, and the constant innovations in the additive manufacturing process, as well as the decreasing costs of 3D printers, are expected to only drive their popularity in the coming years.

The global 3D printing market size is estimated to reach USD 35.38 billion by 2027, advancing at a CAGR of 14.6% over the forecast period. 3D Printing is also known as Additive Manufacturing (AM), as it involves the successive addition of layers of materials in various 2D shapes using an additive process, which ultimately forms a 3-dimensional object. 3D printing is widely adopted in the industrial sector owing to the growing need for enhanced product manufacturing and a shorter time to market. The field of additive manufacturing is projected to advance substantially, on account of the increased R&D investments and technological advancements. Some of the major verticals utilizing 3D printing technology include industries, with the major ones being automotive, healthcare, and consumer electronics.

The automotive and healthcare verticals have heavily contributed to the market revenue in recent years. Major automotive brands such as Ford, Volkswagen, and BMW, among many others, have become accustomed to producing vehicle parts using 3D printers. The healthcare sector has seen exponential growth in demand for 3D printers, ever since the coronavirus pandemic struck the globe. The continued shortage of protective equipment and ventilators in hospitals due to high admission rates due to the virus brought 3D printing into focus, with many companies helping to address this shortfall in equipment. For example, the Veterans Health Administration (VHA) has partnered with 3D Systems with the aim to include more on-site 3D-printing capabilities, while at the same time train the VHA staff to become compliant manufacturers of medical devices.

The 3D printing industry is classified on the basis of component, printer type, technology, software, application, material, and vertical. Some of the major technologies adopted by the industry include Stereolithography, Fuse Deposition Modeling, Direct Metal Laser Sintering, and Inkjet printing, among several others. The major verticals include industrial, which is subdivided into automotive, aerospace and defense, and healthcare, among others; the other major vertical is desktop 3D printing, which is used for fashion and jewelry, dental, and educational purposes. Polymer, metal, and ceramic are the major materials utilized for 3D printing of objects. The market is highly competitive, with some of the notable players being Stratasys, Ltd.; Materialise; EnvisionTec, Inc.; 3D Systems, Inc.; GE Additive; Autodesk Inc.; Made In Space; Canon Inc.; and Voxeljet AG. 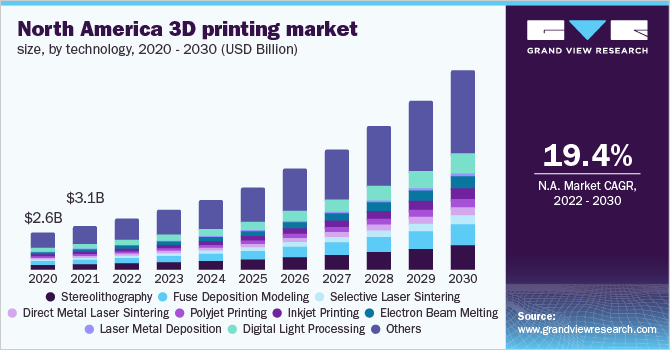 ·       As per an article published by 3D Insider, a survey conducted in 2018 revealed that 70% of the companies that took part reported increased investment in technology; this number was 49% in 2017. Additionally, out of these companies, 12% stated that they had invested more than USD 100,000 in 3D printing, which points towards the rapid growth of the market

·       Demand for desktop 3D printers is expected to increase over the forecast period, as 3D printing is gaining popularity among hobbyists for domestic, household, and personal usage as well as in the education sector for training purposes

·       The prototyping application segment dominated the market in 2019 and is expected to expand its market share to more than 50% by 2027; on the other hand, the functional parts segment is projected to show the fastest growth during the forecast period

·       The polymer segment contributed to almost half of the entire industry share, while the metal segment is expected to dominate the market through 2027. This is attributed to the increasing demand for metal 3D printing from major industry verticals such as automotive, and aerospace & defense

·       The 3D printing market has witnessed heavy adoption in the European region, as the region is home to many automotive and aerospace companies, while the widespread outbreak of the COVID-19 pandemic also fast-tracked the market growth in the healthcare segment

·       Major industrial brands have tied up with 3D printing market players in order to cater to demands for innovation and cost-effectiveness. For example, in November 2020, Volkswagen invested in two Stratasys J850 3D Printers to enhance their automotive design

·       Also, in November 2020, Materialise NV announced the Bluesint PA12, a material innovation that enables 3D printing with up to 100% re-used powder. This development is expected to eliminate waste in 3D printing

Have Any Query? Ask Our Experts for More Details on Report: https://www.grandviewresearch.com/inquiry/450661/ibb

Grand View Research is a full-time market research and consulting company registered in San Francisco, California. The company fully offers market reports, both customized and syndicates, based on intense data analysis. It also offers consulting services to business communities and academic institutions and helps them understand the global and business scenario to a significant extent. The company operates across multitude of domains such as Chemicals, Materials, Food and Beverages, Consumer Goods, Healthcare, and Information Technology to offer consulting services.