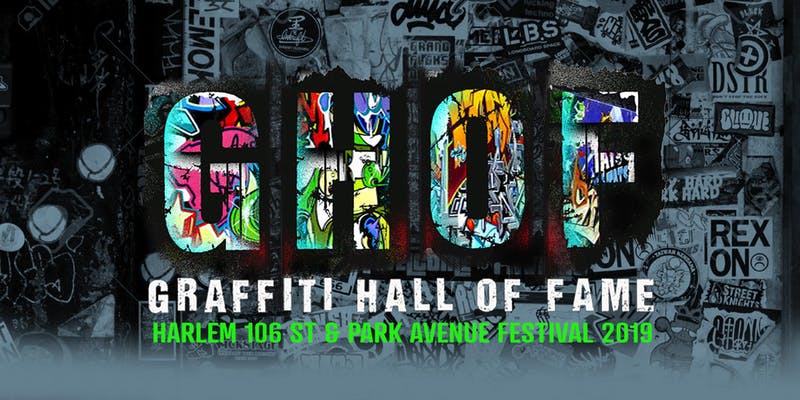 Historically, the Graffiti Hall of Fame began as a graffiti writers’ place to paint, hang out, and share stories of subway tagging runs (paint bombing expeditions). In 1981, Graffiti Hall of Fame was established formally by community organizer Ray “Stingray” Rodriguez and writers like Dez, Jean 13, Part and Skeme. Stingray founded the schoolyard area as a safe space for graffiti artists to pool their talents, showcase new skills, practice as creative, and form relationships. Ever since Harlem community leader designated the concrete walls of the now Jackie Robinson Educational Complex’s schoolyard the Graffiti Hall of Fame, it has been attracting some of the best graffiti and street artists in the world for more than 30+ years and counting.

The Graffiti Hall of Fame has held up traditions, as the artistic expression of the hip hop genre changed the landscape of music and mass media through the eras of the culture’s evolution. “It’s a cult in itself, driven by key players that function as a catalyst of the culture. The GHOF’s existence is as significant for the globalization of the culture as Henry Chaflants’ Style Wars, Charlie Ahearns’ Wild Style films, along with books like Martha Coopers’ Subway Art. It’s a cultural happening that has lasted decades and is at the core of global creative culture.” 1,000 plus of pieces of creative expressions has been painted here over the decades. This is the Mecca of Graffiti culture.  Explained Sharif Profit the GHOF brand manager.

The path was not easy – at the time when graffiti was a rebel outlaw artform, New York City’s MTA (Metropolitan Transit Authority) was on a mission to eradicate graffiti off the whole subway system — declaring all graffiti artist vandals. Through the opportunity of a community event like The Graffiti Hall of Fame, with artist coming together to collaborate and showcase the beauty and diversity of the artform, it allowed the artform to surface in the adversity of the campaign to crush its existence.  Appreciation of the artist allowed it to shed its sordid and outlawed connotation and gained the reputation of the personification of creativity, finding its way from underground to above ground.

The Graffiti Hall of Fame’s organizational baton passed to Joey TDS in the early ’90s, a local artist from the Harlem neighborhood who began to promote it as an annual event for the Harlem community at large. By networking with the local MCs, DJs and Break Dance Crews to come out in support of the event, the stigma surrounding graffiti began to wane and positivity for the artform built up – no longer vandals but artists with incredible artistic acumen doing something productive for themselves and the community.

This year the organizers are constructing the Cube Project – which is a large canvas wrapped 7ft x 7ft cube, which will be painted by some of NYC hottest breakout street artists on the verge. Two Fun-filled days where all the traditional elements of the Hip-Hop culture converge in its true essence. A NYC tradition and celebration, so that the artform can continue to inspire, and grow by leaps and bounds. The artform has changed the overall look of cities around the world.

Every ticket purchase will fund the organization of GHOF for the future.