IMSAM, The International Organization of Economic and Social Observer at the United Nations has announced the delegation of Chancellor Mr. Faraj Mohd Al-Omari as the International Honorary Adviser to administer and fulfill measures in achieving its goals calling for the eradication and containment of poverty and malnutrition in the world. 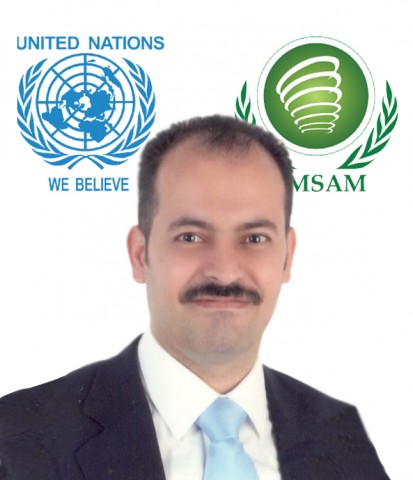 Remetho Maradona, Secretary General of the International Organization of IMSAM International, said that the delegation of Chancellor Faraj Al-Omari for this mission came as a formal utterance of the organization’s commitment to broaden its international mission, raise awareness and venture its reputation. It is with great confidence that Al-Omari’s delegation will constitute a qualitative shift in the region.

For his part, Dr. Edward Rooney, General Counselor at the United Nations Economic and Social Council applauded the decision, which he described as having happened to his family, bearing hopes on Al-Omari in making profound transformations in the march of the United Nations field of social media and public relations while diligently strengthening programs and interventions aimed at the eradication and containment of the precipitating factors of Poverty and malnutrition with utmost efficiency and success rate.

Mr. Faraj Omari is deeply pleased and humbled by his delegation. He addressed and iterated that the mission initiated by the secretariat requires extensive efforts and dedication. Therefore, emphasizing his desire to implement new policies in line with the latest international standards and practices that would be beneficial in bearing the fruition of his calling.

IMSAM is an independent organization rewarded with diplomatic status as a permanent international observer in the Economic and Social Council of the United Nations alongside entities and departments of the United Nations such as UNICEF, UNESCO, etc., which are entitled to appoint ambassadors and advisers warranted certain immunities and privileges to diplomats in accordance with the Vienna Convention on Diplomatic Relations for supporting their calling and developing legitimate dealings, pursuings and businesses.