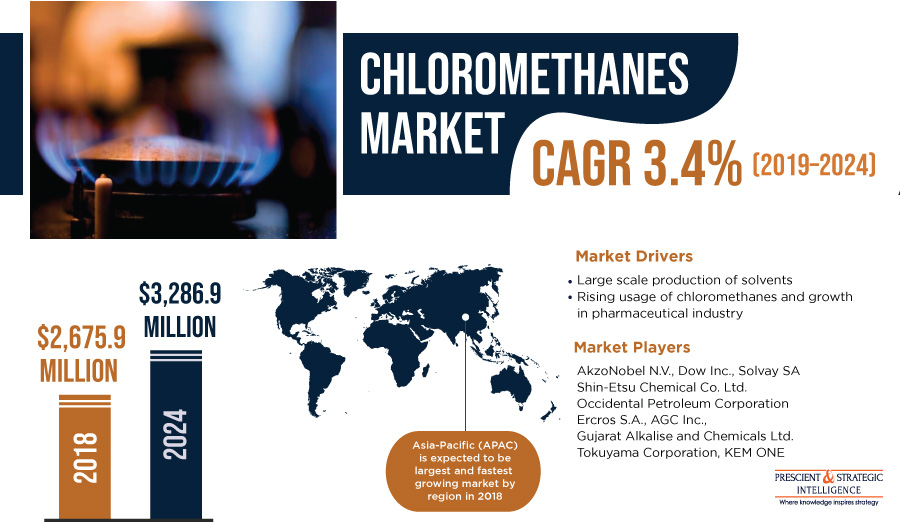 Chloromethanes Market Displaying Bright Growth Prospects
In 2018, the chloromethanes market share valued $2,675.9 million, which is predicted to increase to $3,286.9 million in 2024.

One of the most ingenious polymers in today’s world are silicones, which contain silicon as their primary constituent. They have a wide range of applications, including automotive, aerospace, cookware, coatings, dry cleaning, defoaming, fire safety, electronics, pharmaceuticals, lubricants, mold making, personal care, medicine, toys, and construction. As the demand for silicone grows across the world, so does the consumption of dimethyldichlorosilane, which is one of its main raw materials. Dimethyldichlorosilane, in turn, is processed from chloromethanes, which are compounds containing a carbon atom, wherein one of its hydrogen atoms is substituted by a chloro (Cl) group. There are four forms of chloromethane: methylene chloride, methyl chloride, chloroform, and carbon tetrachloride.

In 2018, the chloromethanes market share valued $2,675.9 million, which is predicted to increase to $3,286.9 million in 2024. Apart from being important for the above-mentioned application, chloromethane derivatives, particularly trimethylsilyl chloride and methyltrichlorosilane, are also used during the refining of crude oil as well as production of butyl rubber. Therefore, with the growth of the oil sector in the future, the demand for chloromethanes is also predicted to increase across the world.

Among the most significant application of the chemical is in pharmaceutical manufacturing. It has anesthetic properties, which is why it is used in several drugs. Additionally, the butyl elastomers manufactured by using the chemical as a raw material, are used to produce plungers and stoppers for parenteral drug vials. The growing healthcare sector is leading to the expansion of the medical device industry, with manufacturers investing heavily in setting up production plants, expanding the production capacity of existing ones, and research and development for advanced technologies.

Get the Sample Copy of this Report @ https://www.psmarketresearch.com/market-analysis/chloromethanes-market/report-sample

With the growth of these two sectors, chloromethane manufacturers are also augmenting their production capacity, to meet the escalating demand for the product. For instance, in August 2016, SRF Limited announced an investment of $26.3 million (INR 1.8 billion) in a manufacturing plant for methylene dichloride and chloroform. Similarly, Dahej, Gujarat, in July 2019, Meghmani Finechem Limited completed the construction of a chloromethane plant, capable of producing 40,000 metric tons of the product annually.

Among the four forms of the chemical mentioned above, methylene chloride was consumed in the highest amount during 2014­–2018. This was due to its heavy usage in producing adhesives, paint removal and stripping products, flexible polyurethane foam, metal cleaning agents, and pharmaceutical products. Owing to the expected growth in its end-application, it will continue being the most widely consumed chloromethane type during 2019–2024. Talking of consumption, the primary application of the compound are silicone polymers, agrochemicals, chemicals & intermediates, adhesives, pharmaceuticals and refrigerants.

Among these, the chemical was used in the highest amount for chemical and intermediate production. Chloromethanes are used for producing the raw materials for butyl rubber, as a propellant and blowing agent, and extractants for oils, greases, and resin. Owing to the surging demand for all such products, chemicals and intermediates will continue being the largest application area of chloromethanes over the forecast period. However, the fastest growth in the chemical’s consumption would come from the pharmaceuticals application.

The majority of chloromethane production and consumption happens in Asia-Pacific (APAC), primarily in China, India, Japan, and South Korea. Among these, the market is set to expand the fastest in China, which is home to a huge chemical industry. Among the primary reasons for the chloromethanes market growth in China are that the country manufactures the chemical not only for itself, but also for other nations. Further, the industries which utilize the chemical or its derivatives are set for substantial growth in the country, which would help it in being the market leader.

Globally, Asia-Pacific dominates the market and is expected to remain the largest market in future as well. This is due to high demand for 1,3-BG in emerging economies of the region. During the forecast period, the market is expected to witness the fastest growth in Asia-Pacific, attributed to factors such as improving healthcare infrastructure, increasing disposable income, and significant growth in the cosmetics industry.

Asia-Pacific (APAC) is expected to be the fastest growing methionine market, with respective volume and value CAGRs of 9.0% and 10.7% during the forecast period. The market in the region is driven by the presence of key players such as Bluestar Adisseo Company, Sumitomo Chemical Company Limited, and Ajinomoto Co. Inc.