As per DelveInsight’s analysis, a higher percentage of diagnosed prevalence was observed for females, in comparison to males, in all the 7MM countries during the study period (2017–2030). 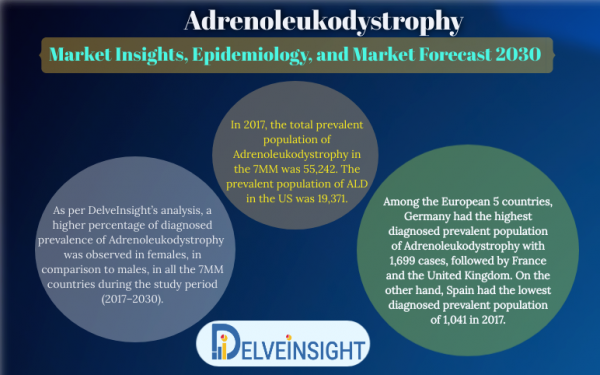 The report gives a thorough detail of Adrenoleukodystrophy market trend of each marketed drug and late-stage pipeline therapy by evaluating their impact based on the annual cost of therapy, inclusion and exclusion criteria, mechanism of action, compliance rate, growing need of the market, increasing patient pool, covered patient segment, expected launch year, competition with other therapies, brand value, their impact on the market and view of the key opinion leaders.

Drugs Uptake section helps in understanding the drugs with the most rapid uptake, reasons behind the maximal use of new drugs and allow the comparison of the drugs on the basis of market share and size which again will be useful in investigating factors important in market uptake and in making financial and regulatory decisions. Some of the emerging therapies in Adrenoleukodystrophy market include Lenti D, Leriglitazone, MD1003, MGTA-456, and others.

4. Adrenoleukodystrophy Market Overview at a Glance

17. KOL Views on the Adrenoleukodystrophy Market.